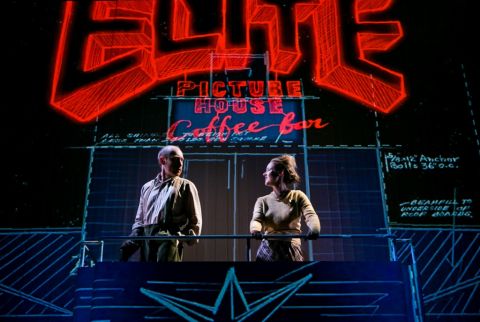 Alasdair Gray’s seminal Scottish novel Lanark: A Life in Four Books dared within its pages to create a colossal imaginary view of Scotland, in particular Glasgow and its industrial environs, bringing international recognition to Gray. In the year of the writer’s 80th birthday, it is fitting that both the principal theatre of his home town, Glasgow’s Citizens Theatre, and the Edinburgh International Festival stages a version of this work.

The four books are ‘designed to be read in one order but eventually thought of in another’ and this equally seminal stage version mirrors the forms with Lanark - A Life in Three Acts that opens with Act 2.

Dreaming of a simple domestic life with some sunshine, rather than the dreich, long icicled sleet that pervades this city, ‘mystery man’ Lanark (Sandy Grierson) makes his way to Unthank. He finds himself at the Elite café/ bar/cinema (Cosmo/ GFT?) where he meets a bunch of bohemian types led by the charismatic Sludden (Paul Thomas Hickey) that includes the intriguing Rima (Jessica Hardwick). After his endoscopic journey to the clinical, futuristic and cannibalistic Unthank, he develops the disease Dragonhide, known in his other life as eczema, becoming a doctor when he finds himself cured.

In Act 1, aka Portrait of the Artist as a Young Glaswegian the curious and discontent Lanark is shown who he actually is. The life of the thrawn ingénu DuncanThaw, a self-confessed ‘proletarian snob’, is played and laid out by a chorus of school weans played by the ensemble against a versatile, stylised climbing frame of a set that’s just a small part of the quite mind blowing design from Laura Hopkins. Rejecting all vocational options, Thaw’s desire to be an artist is given oxygen by a scholarship to the prestigious Glasgow School of Art and in his final year he gets the chance to feel he is ‘working in early days of a better nation’ by undertaking a mural whose purpose is to save an old Springburn church.

With Act 3 moving to a further surreal and filmic fantasy where the ‘intercalendrical zone’ is again crossed, the still idealistic Lanark is back in a dystopian futuristic hell where he briefly becomes Provost and continues to dream of reaching Sunny Provan. This part becomes gloriously self- referential with a delightful and quite astonishingly imaginative realisation of Gray himself. A spectacled Gerry Mulgrew also makes the writer seem present as a cameo.

Between them, David Greig and Graham Eatough have brought together what is a complex and challenging read that looks at society, sex, death, socialist ideals, love, problematic relationships with women, fathers and sons to create a funny and astounding piece of theatre produced on an operatic and highly physical scale. The weel kent and experienced star studded Scottish cast is joined by two young actors making their professional début in this prestigious show, all bringing their own strengths over the 4 hour performance.

Nick Powell’s original and brilliant music rides along in tandem with this complex piece recorded by a band that includes co-composers Nick McCarthy of Franz Ferdinand and former Suede member Alex Lee, and Belle and Sebastian cellist, Sarah Wilson. The refrain of the lovely Burns’ song Caa the Yowes tae the Knowes is as poignant as the inclusion of the Connie Francis hit Who’s Sorry Now? is prophetic.

Gray permitted dear old Glasgow town ‘to be lived imaginatively’ in what is accepted to be a largely semi-autobiographical account of his life and while Sandy Grierson makes this role his own there is no sense of imitation in the demanding role. Jessica Hardwick shines as the love of his life, Rima. Lanark was published two years after Scotland’s first failed referendum and now staged a year after the last one, a point discussed by Professor Randall Stevenson as part of the EIF’s Festival Insights, The Scottish Supernatural.

This is not the first dramatization of Lanark. It has appeared as a BBC radio drama and in 1995 the Citizens Theatre TAG Theatre Company staged it at the Festival. At the time a reviewer longed for it ‘to make it to the screen’. This titanic production that contains your actual big screen on which Gray’s drawings, comic strip style graphics and other technological trickery appear, may be as close as it will get. A phenomenal acheivement!