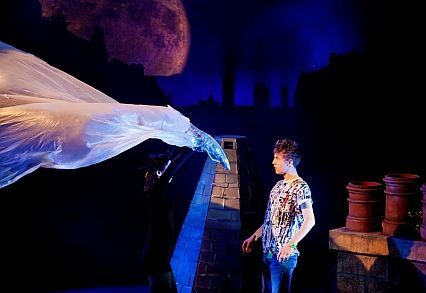 Failing to fall asleep is young Tommy, tormented by nightmares not of monsters but of the death of his mother, an event that has shocked the household into silence. There are things that he won’t or can’t say to his withdrawn, grieving father and surly teenage sister.

Above him dark clouds cap the chimney pots and thunder and lightening ripples over the rooftops. Here there be dragons. Looking outside, a lamp-post seems to transform into one of the mythical beasts. A dream surely? But next day signs of the dragon are everywhere, on plastic bags and as graffiti, and the dragon returns, transforming out of everyday object to apparently offer succour and distraction.

Accompanying Tommy through his everyday battles with his emotions, school bullies and those who reach out to him, the dragon is initially playful but soon seems more menacing. Feeding off the rage within Tommy, the dragon grows and grows, pushing him to violence until he is forced to flee everything. As the heavens open he will need to slay the dragon or come to terms with his inner demons.

This magical tale is told almost without words and flows to a magnificent soundtrack as objects twist and turn around the characters in stark outline against a black background. Books, photographs, even the characters themselves can tumble and crash in slow-motion and around them weaves the dragon, all smoke and glowing eyes.

Belief in dragons is so widespread throughout society that it has been said to be born from an innate ancient fear of predation. A perfect metaphor then for the grief that is eating at Tommy and threatens to swallow him.

This is a piece that has been designed to work across cultures and age groups. There are a few instances where the action seems unnecessarily protracted but this was no challenge to the younger members of the audience who remained silently under the spell of the dragon.

An accomplished, illuminating and entertaining flight of fancy born out of the darkest of places.