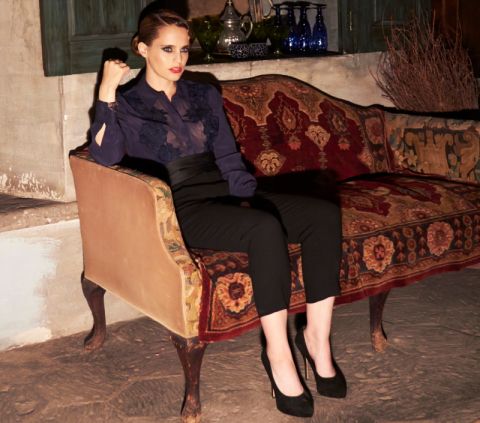 Anna Calvi stands transfixed in spotlights while shredding electricity from her fingertips like a Young God born anew wielding powers we mere mortals can only dream of. She wrings Heaven and Hell from her guitar in a manner reminiscent of Jimmy Page or Prince at his best, a slight figure on stage who now has molten energy coursing through her diminutive frame flooding into the audience. It's quite a spectacle.

With two Mercury Prize nominated albums in recent years, her 2011 self-titled debut and 2013's One Breath, Calvi has been compared to the likes of Patti Smith by no less a pop luminary than Brian Eno. She certainly shares Smith's ability to alchemise her stage presence into an elemental force of nature, but musically Calvi more resembles PJ Harvey tackling the Scott Walker songbook. And not the orchestral grandeur of 1960s Scott, although there are elements of those iconic records in there. Calvi's prime influence is the turbulent dissonance, fractured song structures, punching-a-side-of-beef-as-percussion of Scott's brooding darkness approaching late period. Topped off with sudden passages of quicksilver lightning guitar flashes.

Heritage Orchestra are a predominately string and chorus based affair, with a catalogue of collaborations with luminaries such as Massive Attack and Spiritualized. Tonight, they remain a glowering black-clad presence to Calvi's left flank, providing surging oceanic bolster to Calvi's music. At times, however, their arrangements feel somewhat haphazardly tacked on and whole sections pass while they remain mute and unmoving.

Calvi is at her best when confined to her stripped down trio of musicians and, in fact, she's at her very best when simply alone with her guitar. She's a tiny maelstrom of tangled curls and furious lipstick raging expressively and eloquently at one with the instrument. The guitar is such an overused and totemic piece of equipment but it's still rare to encounter someone properly working it. Anna Calvi, frankly, rocks.