You’re Not Like the Other Girls Chrissy, Pleasance, Review 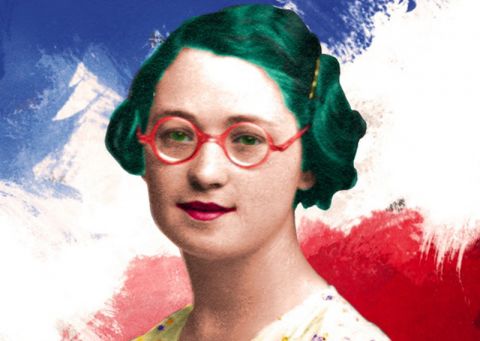 A bespectacled Christiane (Caroline Horton), laden with so many suitcases that it’s clear she hasn’t packed a capsule wardrobe, bustles on to the stage where a faded French flag is the fittingly symbolic backdrop. Speaking in French clear enough to massage the egos of basic speakers, we learn she is in the Gare du Nord in Paris in 1945. She is about to board a train be reunited with her English fiancé Cyril Horton. Following a wartime correspondence and an engagement that nearly failed (nobody told her pearls are for tears) she is finally returning to Cheadle, where they met at a tennis match, to start a new life together.

This true story has been pieced together by Horton after finding her Grandmother’s letters when she was in sheltered housing. Horton rewinds her Grandmother’s love story to 1939 when they first met going through the dramas of long distance love with the added big picture of a war going on.

She brings her inventive, animated style to this, her first piece of theatre, that began its life in a 2010 Fringe show from where it’s gone on to great success. Her set of valises act as miniature stages for pop up scenes like a Paris cityscape or a BBC radio station. She has a gift of storytelling and character acting worthy of Joyce Grenfell in her capturing of an ingénue with poor eyesight in an honest and engaging style. The narrative in its actual time line appears on screen at the end where we also meet the real Christiane who sends a message of ‘Vive tous!’

As in any light hearted French tale, there is the ubiquitous appearance of balloons and Rina Ketty’s poignant song J’attendrai (I will wait) of the period hits the right note as that is just what Christiane did.

This is clearly a labour of love from a granddaughter to her grandmother et comme c’est charmant!