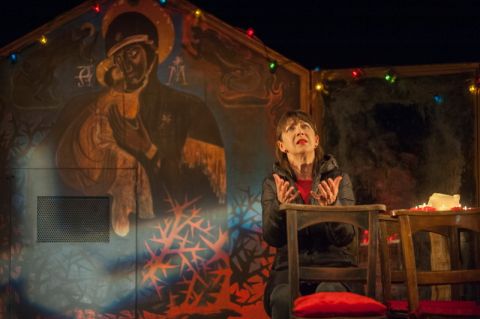 Once again Maureen Beattie gives an impassioned performance as this character/narrator in this third and final part of Québec dramatist Jennifer Tremblay’s trilogy.

Her mother is dying and has both her daughters at her bedside. But that’s not enough. She is begging to see her son. Begging that it is his hand that holds hers as she leaves this world, not her loyal daughters. Over the piece, Beattie’s unnamed character delves back in to the past to expose the truth about what turns out to be her half –brother and why he is estranged from his adoring mother.

Entering the large hall that was a former church and now Assembly Roxy, there is real urge to genuflect as the stage is set as a stylised Catholic altar from artist John Byrne with a triptych showing the Virgin Mary holding her son Jesus in the centre with the other two panels being flaking mirrors. Candles of all sizes create the light, including a stand of shimmering votive candles in red holders. Byrne’s subtle red motif in Beattie’s beautiful red earrings, lipstick and patterned cardigan that appeared in The List comes to full flower here with the repetition of the earring and lipstick and the colour appearing in her jumper, church cushions, books and the blood of birth and puberty. Sounds from Philip Pinsky add atmosphere to this powerful one woman play.

This woman rails against unanswered prayers that the absent son should soften his heart and arrive at his mother’s deathbed. She mourns her real handsome but feckless father, idealistically shown through fairground music and twinkling stars, and sees with new eyes the ‘perfect’ new father who proves that blood is thicker than water when his male child arrives.

This poignant feminine and feminist story points up the universal truth of the prodigal son and speaks of the ‘one who leaves becoming the centre of the family’. Bitterly we learn that when a woman gives birth to a longed for son, she is referred to as a ‘random womb’ with a controlling latter day Adam insisting the boy child has sprung from his thigh! Maureen Beattie is again both star- soaring and realistically grounded in this magnificent solo role that she has made her own.

The previous two parts of the trilogy The List and The Carousel have appeared to acclaim in Festival Fringes since 2012 and this year sees the world premiere of the full trilogy which is part of Made in Scotland showcase.