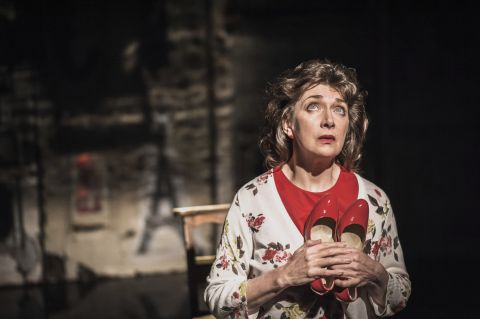 This European premiere is the second in a trilogy of plays from Québec dramatist Jennifer Tremblay, a one-hander starring Maureen Beattie who appeared in The List.

On an emotional and shocking journey through her past, one woman calls on her dead grandmother to help unearth buried truths. The voices of three generations – grandmother, mother and daughter – are given breath in this poignant and emotional story by stellar actor, Maureen Beattie.

Against John Byrne’s fabulous panelled backdrop of pale distressed wood covered in sepia snaps, skating boots, Catholic imagery, fairy lights and allusions to the Carousel, Beattie goes through the gamut of emotions that each generation demands under the astute direction of Muriel Romanes.

The red motif that featured so subtly in The List is more prominent this time round on Beattie’s dress, shoes, earrings and the kneeling stool in front of the single wooden chair that centres the stage. A miniature model of the much mentioned route 138 sits at the side complete with saggy telegraph poles.

Jeanine Byrne’s lighting design creates evocative giant shadows and gentle shades that add to the atmosphere as demanded, while Philip Pinsky’s musical score with its water-like sounds and heartbeats completes the whole.

The narrative of this middle part of Tremblay’s trilogy is quite different to the first as the three women’s voices interweave and the time is not sequential but again Beattie gives a brilliantly accomplished performance over the whole piece. She becomes each part, from wanton woman to protective mother and even mischievous sons with consummate ease.

Women’s lives and their relationship with the men they love, whether that be sons, fathers, or lovers are part of this affecting tale of lives tainted with secrets and sorrow that ultimately find joy on the carousel.

The production has been created in the Scottish Borders and will play throughout the festival period before touring to The Brunton, Musselburgh and The Tron, Glasgow.