A Girl is a Half-formed Thing, Traverse, Review 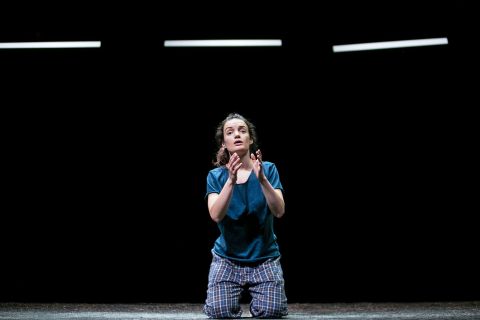 A Girl is a Half-formed Thing comes to the stage with much acclaim. Originally a novel by Eimear McBride that has won numerous prizes, it has been adapted lovingly by Annie Ryan for a solo female performer. That performer is Aoife Duffin who gives a stunning performance as she relates the traumatic events of the unnamed girl over the 85 minutes of this harrowing piece.

Against a set of five stark strip lights a black box floor holds a chalk dusted circle where Duffin stands barefoot and dressed in modern day pyjamas/lounge wear. She has to be saluted for her Amazonian staying power over what is such a challenging piece of work to perform. Without respite, she storms through what must be a mountainous monologue to master without missing a beat.

From her birth, through her sexual experiences at far too tender an age, to the chilling end, fearsome descriptions abound in this prose poem that by the nature of its stream of consciousness style is not a straightforward text to follow.

Annie Ryan found herself reading from the book aloud on her first reading of it with the sense that the text “wants to be heard.” Conversely, as a play it feels like a novel whose lines need to be read and re-read, taken time over to appreciate the radical writing. As it is, on stage, there is just one chance to grasp the immensity of what is going on.

Traverse 1 feels like too big a venue for such intimate unburdening of this unrelentingly bleak, young female voice that sadly experiences no redemption in her young life.