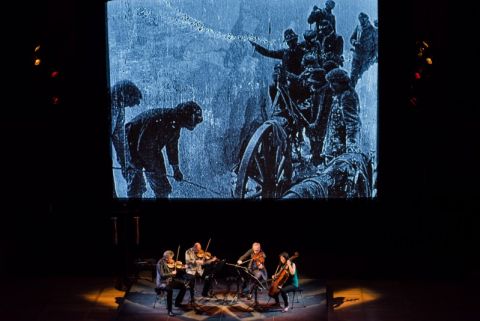 “Everybody is rushing, running, trying to escape almost certain death in this hail of enemy shells. Today I have seen the real face of war.” - German musketeer, Hans Otto Schetter.

1914 - 1918, The Great War, the “War to End All Wars”, except of course it wasn’t, being more akin to a ground zero that launched a century of conflict. As military historian Sir Basil Liddell Hart commented, “He would be a rash optimist if he believed the next generation would trouble to observe the warning”.

Prelude to a Black Hole first takes us back to the spark that ignited the war, the assassination of Archduke Ferdinand in Sarajevo with Byzantine chant from the seat of Serb Orthodoxy. The Prelude features worldwide work (listed below) that would have existed around the time from Western composers to traditional and blues musicians.

Beyond Zero’s Serbian Composer, Aleksandra Vrebalov observes that “artists have typically been the keepers of sanity, showing its brutality, destruction, and ugliness. For many, across history, creating art in those circumstances served as a survival mechanism.”

As the Prelude ends with Rachmaninov on the lowest note written for a choir, it is picked up on the cello as a siren like drone, segueing into Beyond Zero: 1914-1918, a new work for quartet with film written for Kronos.

The screen behind the quartet blossoms as an image of early tanks, “land battleships”, wavers in distorted colour. "...lumbering slowly towards us came three huge mechanical monsters such as we had never seen before." said Bert Chaney, a nineteen-year-old signal officer in the middle of the war. Some of these images have not been seen before either, restored from volatile and degraded 35mm nitrate stock by filmmaker Bill Morrison. From tanks pushing over trees just because they could, to fragile early moth-like aircraft flying into the light as the images flicker and fade, seem to burn and warp, to offer glimpses of troop ships, parades and battlefield training.

The music is more abstract than Vrebalov’s previous work, what she describes as a little more universal in sound - "It's tonal and also atonal. There are islands of tonality, but in a huge arc where everything goes toward disintegration and abstraction and noise." In composing the piece she was inspired by the anti-war writings and work that was around at the time of the war, including that of Wilfred Owen and Siegfried Sassoon.

The music, played with typical Kronos precision, increases gradually with the footage, gathering in intensity and sharply defined rhythm, robust atonal chords and lamenting sweeps. There are a number of recordings from other wars embedded throughout the piece (though not always easy to discern) – speeches, military commands and air raid sirens. It ends with the image of a falling parachute and a return to a fragment of the dark Byzantine hymn Eternal Memory to the Virtuous, chanted by Serbian monks.

The film, while dramatic in its deteriorated state, straddles the human and the mechanical and the use of enactment and training footage gives it a strangely bloodless quality. That said, we are probably so predisposed to the idea of a soundtrack that the live performance is still in danger of not being the focus.

The two parts taken together meet the aspirations of Festival Director, Jonathan Mills in providing a “poignant journey through inspiring stories of optimism, strength and defiance as we recollect those flashes in time when civilisations have been shaken to their core”.

Prelude to a Black Hole