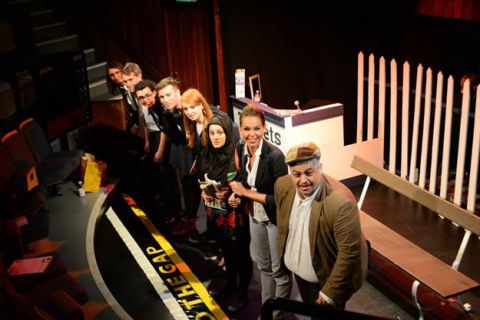 This is what the Edinburgh Fringe is all about. Take a handful young actors, singers and musicians, a composer and a lyricist, stir briskly together and when ready to serve, stage the world premiere of Departures: A Song Cycle.

On 1st August, 2014, a packed house gives a standing ovation. Not bad going. Verismo, a music-theatre company based in Sheffield, was only founded this year by Joe Bunce and Matthew Malone, the lyricist and composer of the show.

The word Departures implies travel and transport and here the setting is Platform 2 at a typical British provincial station, complete with ticket office, bench, clock and "Please Mind the Gap" warning sign along the track edge.

The inspiration for the plot was taken from real life interviews with train travellers, asking them “what is the biggest challenge in your life at the moment?". The responses provided character backgrounds each with authentic, topical views and concerns about living in the UK today.

The live band on stage sets the brisk, spirited mood from the first bar; the music is described as a blend of pop to funk to barbershop, but this is seriously sophisticated, sumptuously sassy composition. The lyrics are sumptuously sassy too, brilliantly witty rhymes akin to modern day Gilbert and Sullivan.

The ticket clerk makes an announcement (in song): “Due to signalling problems...the 1542 to Canterbury is delayed for 48 minutes”.

The passengers sigh with despair, turn on mobile phones, read newspapers and books, sitting silently… until a young man bursts into song to reveal his personal angst, the boredom of his job, 13 years of dull routine. “Goodbye to yesterday, the same as today.”

He is joined in a duet with a young lady, (who stops doing a crossword), agreeing he should toss out caution and do something new with his life.

One by one the bored, delayed passengers take their turn to tell their personal story: a girl reveals she comes from Bucharest, upset to be viewed as an immigrant, a gypsy. A shy young man describes his failed pursuit of women, unsure of internet dating. A teenager is miserable, apathetic and just wants to escape reality like Superman.

What is slowly revealed is that all the travellers feel isolated from society, disturbed, distraught, lost in their own sad lives.

The inspired narrative and musical score, shifting melodies and rhythm blend beautifully. The complexity of style reminds me immediately of Sondheim, such as his romantic–comedy musical “Company”. Likewise this is a concept musical of short dramatised vignettes.

For some numbers, the pace hots up into a bluesy beat, but soon reverts to Malone’s signature, flowing, linear progression.

The entire ensemble is superb with polished professional performances all round. But in terms of cracking good numbers, I would have to select Matt Bond, standing front stage to sing Marginal Man with such composure and understated passion to reflect his own heartache (reminiscent of the simple yet effective personal prayer, “On My Own” by Eponine in Les Miserables.)

“Departures: A Song Cycle” is an exciting, innovative, intelligently conceived and choreographed show. Dramatic storytelling with a sense of realism is the strength behind the emotional heart of this modern opera.

Remember the names Bunce and Malone - the Kander & Ebb, the Lerner & Lowe, the Sondheim of Musical Theatre of tomorrow.