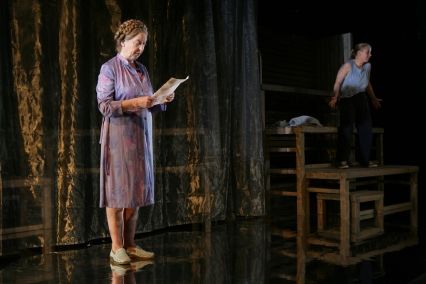 Finnish composer Sibelius held the province of Karelia in particular affection, inspired by its traditional culture and folk music. He composed the symphonic poem the Karelia Suite as a young man: “Music begins where the possibilities of language end."

Winner of the 2012 Lea Award for the best Finnish play of the year, “13 Sunken Years” by Paula Salminen is a family portrait of three generations of women living in a small remote town in Northern Karelia.

Their quiet, uneventful lives are shattered when Helena disappears in mysterious circumstances on the day her daughter Eva graduates from school. She has no choice but to take care of Ursula her grandmother, feeling isolated and trapped, while her plans for university are abandoned.

In her sadness, Ursula sinks into a slowly declining state of dementia, forgetful and confused, while Eva delves into the past to know more about Helena and what happened, - “she would never commit suicide” - and find out who her absent father is, amidst rumours.

Through flashbacks to witness key moments, we see the free spirited, vivacious Helena in her red dress, this scarlet woman, a single mother. While shocked at the news of her pregnancy, Ursula advises curtly, “Don’t eat pike!”.

Ambitious too in its concept, adapting the Finnish narrative into the dramatic idiom and dialect for this ensemble of Scottish actors.

Nicola Tuxworth in the central role as Eva speaks with a monotonous drone, lacking any credible sense of personality or emotion. Perhaps this expresses the emptiness in her life but it comes over as flat and soulless.

There would be a uniformity of accent spoken by this close knit community of Karelia. So here, why would Helena have a more refined middle class accent compared to Eva and her mother Ursula? The cast speak with different Scottish dialects, as if from different regions of Finland.

Helena is played with fiery passion by Louise Ludgate, capturing both her femininity and feminist ideals. Billy Mack gives a fine portrayal of Eki, the reserved, solitary canal lock keeper, revealing a keen intelligence and romantic streak behind his quiet demeanor.

What does not assist the dramatic atmosphere is the Music Hall at Assembly Rooms, a vast arena seating several hundred. For this performance, with an audience of about 50, we were told to sit in the first few rows of the front stalls. Some seats were marked Reserved – “not to be used due to poor sight lines” said an Usher.

The black box theatre of Traverse 2 would have been the ideal space to enhance the intimate, dark claustrophobic setting of this contemporary Scandi-noir folk tale from Finland.