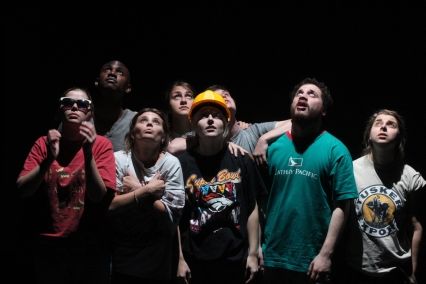 It's exactly three years to the day (5th August) since the Chilean mining accident which trapped 33 miners 2,300 feet below ground.

As the audience take their seats the cast members chat to them, eliciting memories of that day and the following dark days which propelled the buried men into the light of a media circus. As they change into blue overalls they take us down, beyond the "Chinese whispers" of the news reporting to imagine the hope and despair of the men and those who waited and watched.

The tale is related in an inventive mix of physical theatre, live music, video and projection showing slices of the rescue mission from each point of view. A spokesperson keeps us up to date as the miners share out the meagre rations and contemplate their fate.

As they forget what the sun looks like they start to lose track of the day and time and their grasp on which part of their thinking is memory and reality. Each attempts to find ways of coping with the situation and each other. For Edison this involves singing, but this unearths Elvis Presley from the darker corners of the mine and his mind.

Above ground there is a news explosion of escalating hyperbole buffered by the medical team's psychologist, Iturra. When contact is made with the miners it is he who looks after their interests, but it soon becomes clear that his need to control their behaviour may bring him into conflict with both them and their waiting families.

As the days extend to weeks, into months people are connected by their plight, the empathetic audience growing to one billion viewers; the biggest event since the Apollo moon landing. Along with fame comes the full glare of the media's cameras and lights. As Chilean writer Hernán Rivera Letelier said, "It's true that you've survived a long season in hell, but, when all's said and done, it was a hell you knew. What's heading your way, now, comrades, is a hell that you have not experienced at all: the hell of the show, the alienating hell of TV sets".

As the story comes full circle the use of actual real life footage of charismatic Edison Peña is an inspired move.

For all the seriousness of the situation it is handled with playfulness and humour. The scene where Edison exorcises Elvis is jaw-dropping, if slightly too long. Generally though the pace is good and the use of music and visuals effective. Some of the frenetic scenes with the press pack could be toned down just a little. The hard working cast might deserve a break, as they end up bathed in a sheen of sweat as if they have been trapped down a mine.

There may be more polished shows on the Fringe but there are few that drill into such a rich vein of human interest.