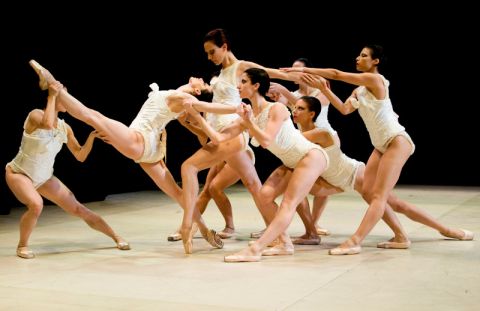 The Deborah Colker Dance Company's Tatyana is a stunning event. Based on Pushkin's poem Onegin, it follows the story of an aristocrat who callously rejects Tatyana's love when she was young. Many years later, when she has transformed into a beautiful woman he espies her at a ball and realises he is hopelessly in love with her - but to no avail, as she resolutely remains loyal to her husband.

A visual treat, the large wooden structure, which encompasses the stage, is rather like an octopus with its body and legs being used continuously as a support, both for physical and emotional ends.

And the dancing and choreography is superb. From the moment they emerge on stage and the dancers exquisitely unfurl their bodies we are mesmerized by their performance.

Their agility is extraordinary and some of the risks they take, when leaping from one part of the structure to one another, is breathtaking.

The pace of the piece is excellent. The music in Act 1 is an innovative choice capturing the mood beautifully as it seamlessly blends from Tchaikovsky to Stravinsky to Terry Riley.

In Act 11, Rachmaninov's Piano Concerto number 2 predominates and with it's tempestuous first movement it captures the essence of Onegin's emotions when he glimpses Tatyana at the ball. And the introduction to Act 11 was stunning.

The structure has been removed, and apart from a raised platform at the back of the stage, all else is bare. But on a sheet of gauze, which encompasses the whole stage, huge laser lights criss-cross the space.

Tatyana, portrayed by all the female dancers on the platform, is separated from Onegin who, with all the male dancers, is at the front in a state of anguish, having realised what he has lost. And at the end of the performance the stage is lit up with vast lights, almost simulating the tears of Onegin.

This is the Deborah Colker Dance Company's Edinburgh International Festival debut and with such a thrilling performance, hopefully they will soon return with another extraordinary innovative production.