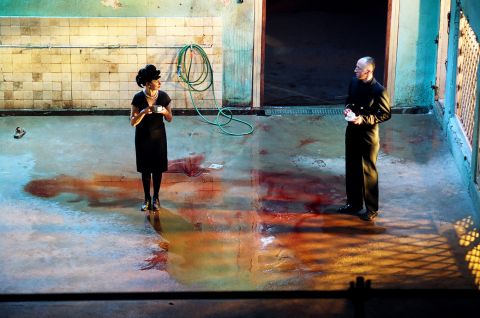 “Four men from the rebel Syrian Army check their assault rifles and sling them over their shoulders. Their commander gives final instructions. Rebels have taken control, but troops backed by tanks, warplanes and helicopter gunships launched an offensive to drive them out”.

A news report this week on the ruthless Syrian uprising, but it could equally well describe the brutal scenes of war torn, British and American-occupied Iraq, c. 2008; this is the scenario for TR Warszawa’s epic, bloodthirsty reinterpretation of Shakespeare’s Macbeth. (The play is performed in Polish with English surtitles.

Lowland Hall at Ingliston is an aircraft hanger of a space, within which a vast, split level, brick and steel building represents Army HQ, with its wall of video screens, Macbeth’s private quarters and bunker.

“Major Macbeth, 1st Scottish Airborne sector reporting” comes the shout on a crackling radio link to Commander Duncan.  Defying orders to return to base, the commando unit decide to attack a group of rebel activists. Through the dark shadows of the enemy compound, laser lit rifles pinpoint their target and Macbeth brutally shoots a man, kneeling at prayer.

In the chilling silence which follows, a burka clad soothsayer addresses Macbeth, whispering her prophecies of military honour for his heroism. And perhaps, a greater position to follow, “If chance will have me king, why, chance may crown me”.

Interspersed with a contemporary, Hollywood action movie- inspired dialogue by director Grzegorz Jarzyna,  we hear (and read on screen) a brief smattering of a few soliloquys, to express the poetic language of the original play.

We first see Lady Macbeth in a tight black pencil skirt and white Madonna bullet bra corset. She’s a bit of a tart, enticing and cajoling her husband to play seductive, dangerous games of sex and war. Their relationship and pursuit of power is dramatised in a series of  terrifying intimate scenes.

From my seat in Row G, the sightlines were very poor, masking most of the lower left stage.  (Fortunately, I was able to watch the production again, with excellent view, courtesy of a live broadcast shown on the Guardian website.)

A few key moments: Lady M, the vamp, sucking the blood off Macbeth’s fingers after the gruesome murder of Duncan; they calmly sip a cup of tea beside the blood stained floor.  At the banquet, Macbeth spills red wine over the white cloth, startled at the sight of Banquo’s ghost. And the demise of Lady M, while doing the laundry, is literally shocking.

And so we hurtle full speed towards the horrific climax amidst a soundtrack of whirring helicopter blades, flashing lights and an explosion of flaming gunfire. It’s all rather reminiscent of playing X box 360 games such as Call of Duty Black Ops or Clancy's Ghost Recon  - military tactical shooter videos for a vivid interactive war zone experience.

This may not be the Scottish Play as we know it , but the epic staging and dramatic concept by TR Warszawa is certainly impressive – and crazily imaginative, (Elvis and magic rabbit cabaret acts are just bizarre).

Witness the piercing, cold steely eyes of our tragic hero, blown up on a large screen, and we see a convincing, contemporary Macbeth as commando, assassin, war criminal. A thrilling theatrical spectacle.