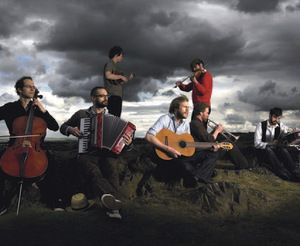 The St Andrew's boys are back from their UK jaunt with a string of Scottish shows. As well as enduring a disappointing appointment with Glasgow depressives My Latest Novel - who seem to have travelled into some sonic backwater since a couple of months ago - the audience were subjected to the worst sound quality, as the hundreds of conversations happening in The Queen's Hall swirled around like nails in a tin mouth.

That so many transactions were taking place while ‘Novel were bringing us into their world shows two things: The first is a plus - the place was rammed. The second is not - no one cared. The extent of My Latest Novel's bad night was made lurid in the light of Broken Record's set. Every element that worked against the support act thankfully swung into the favour of the headliners. The sound was full and professional, there was a lightshow -and- there were melodies. Tunes. They only went and sounded like a bunch of song writers plying their trade with a large but well wielded selection of instruments - blimey, who'd have thought of that?

Their time on the road has taught them a new level of tightness, the songs from Untill the Earth Begins to Part have a casual virtuosity to them and they are living up to (most) of the hype. If the News Makes you Sad, Lies and If Eilert Lovborg Wrote a Song are still among the best of the tunes but the set was full of gems from the album. In a way Broken Records are still gestating, trying to find their own voice as it were, but by the time the second album is out they'll be a force to be reckoned with.