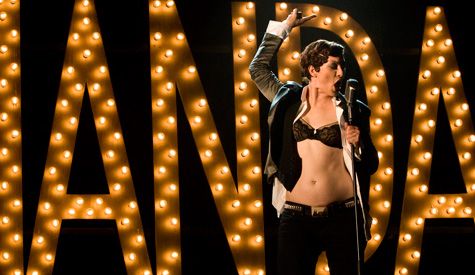 The Indelicates are first on stage tonight and they turn a few heads with their Clash tinted, overtly London accented front-man and stationary, piano playing front-woman. The songs are petulant and self-consciously self-aware - the track We Hate The Kids is the best example of this. Social commentary songs always risk tumbling into prosaic pieces of anti-music if they lack a certain charm. Still, by the time they leave the stage they seem to have made a few new fans.

Before erstwhile Dresden Doll and fulltime chronicler of the mythic, romantic, and challenging pulls up her piano stool the crowd is treated to a bizarre dance routine by a bunch of semi-naked people. Nothing seems strange about this when the lights go down and the first frantic notes of Runs In The Family scatter through the air - it's just that sort of night.

Amanda Palmer dresses like a Tim Burton character, or a vampiric pre-revolution French aristocrat, and is musically somewhere between neo-classical and pop. Lyrically she's all over the place. She's goth in the Nick Cave way rather than the My Bloody Suicide Romance way, plundering recent and ancient history and her own personal experience to create music that comments on life in a way bands like the Indelicates can only dream of.

Tonight Amanda is on form, all the songs from Who Killed Amanda Palmer are tight and well rehearsed and the band, which includes a full brass section, is always side by side with their leader. Blake Says is one of the more poignant moments in the set as well as a epic version of Astronaut.

The most impressive thing is that the professionalism on show and the sheer amount of times these songs have been sung does nothing to diminish the different energies her music conjures and on the night even the most casual fan was sent away with a perspective that only a live show like this can offer.