Year Of The Horse Review 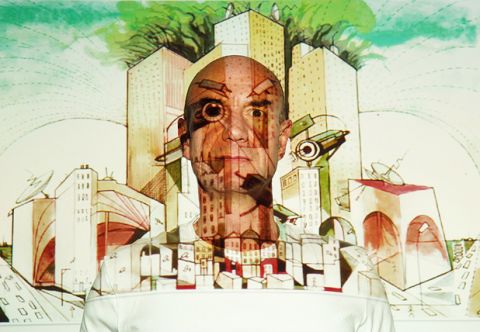 It is unfortunate that the life and work of political cartoonist, and man of many other talents, Harry Horse is overshadowed by the horrific circumstances surrounding his death in January 2007. Perhaps this is why Tam Dean Burn takes the unusual step of providing an introduction to this evening, softly informing us that the visual backdrop will display the cartoons Horse supplied to the Sunday Herald in the two years prior to the bodies of he and his wife being discovered at their home on West Burra.

The cartoons are shown in chronological order, while Burn speaks the words that Horse wrote to accompany his visions. An unsettling, electronic soundtrack provided by Keith McIvor also hisses around the theatre; at times a dark monotonous drone, at others a chattering, multi-tracked babble.

Horse's cartoons take the standard tropes of newspaper political satire to present a true vision of 21st century life as Hell, with little to redeem it. The figures of Tony Blair and George W Bush dominate this dystopian nightmare, represented in numerous varieties of undead cadavers, forever enmeshed in the wars of their creation.

Conspiracy theories also abound through the images, complete with feelings of ever increasing paranoia at the surveillance state and the various atrocities committed by governments in our name. A recurring motif in the cartoons is that of an all-seeing eye gazing out from centre picture, regarding us in calm dispassion. It is depicted almost as though our collective mystical third eye has been revealed to us as simply being an ever present CCTV camera, monitoring our very essence in order to exploit us, a train of thought which could lead one to declare the whole of human evolution a bad joke.

Burn himself prowls the stage in a white hoodie, which enables him to fade into the cartoons themselves. He archly utters Horse's words like a deranged circus master while the writing itself becomes increasingly personal with Horse describing the terrible toll morphine is taking on his wife's MS. The performance becomes particularly chilling nearing the end, as Horse recounts how all his heroes, from William Blake to John Balance, are all dead while the screen shows an image of utter despair and darkness.

Year of the Horse isn't an easy ride. It's essentially two years of a man's creative life displayed as evidence of an increasingly troubled and darkening mind. It is a terrific piece of work, however, and while Burn is to be applauded for his performance, it is Horse's cartoons which are burned onto your brain at taking your leave.