A Life in Three Acts Review 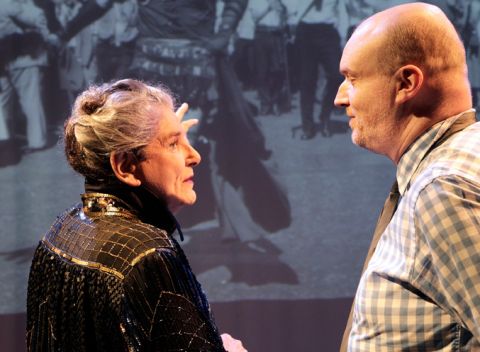 Bette Bourne, the renowned drag artist, is now in his seventies. In three separate parts, A Life in Three Acts takes us on his autobiographical journey. The idea initiated as a result of a series of recorded conversations the artist had with the playwright Mark Ravenhill who interacts with Bourne throughout. With the aid of photographic montage, the production consists of an edited, scripted version of these conversations.

Born in l939, Peter Bourne has led a fascinating life. Brought up in a post-war macho environment in the East end of London, bullied by his father (which probably strengthened him for his life to come), he left that environment became a successful actor, joined the Gay Liberation movement and then... started to wear dresses, which he did with aplomb in the l960's.

"It was a release to wear a dress," he joyously proclaims. And so his life progressed as Bette Bourne and he ultimately formed his own successful gay cabaret troupe, Boolips. Coming out to your families as a gay man or lesbian is still not easy for some, but if you're a transvestite it does require a lot of courage to walk out in a frock and proclaim your sexuality to the public at large, even in the 'liberated' twenty-first century.

Bette Bourne is indeed a most entertaining character and it is important to hear of the early struggles of the Gay Liberation Movement, of which he was an integral part. But because the show is read from a script, it does lose its spontaneity. However, by the time we got to the third Act, Bourne was starting to humorously improvise and no doubt as the run progresses this will happen more frequently.