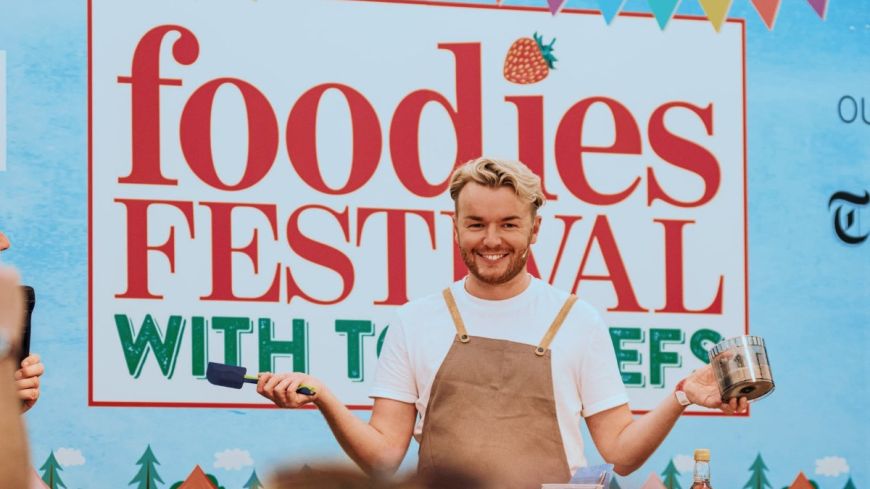 The Foodies Festival is an annual 3-day family festival, revolving around food, taking place in a temporary site in Edinburgh's Inverleith Park.

There are three main foodie stages this year where you can find culinary presentations: The Chefs Theatre, featuring top chefs, baking lessons in The Cake & Bake Theatre, and wines, champagnes and cocktails in The Drinks Theatre.

Chefs lined up include Masterchef: The Professionals 2021 winner Daniel Lee, and finalist Liam Rogers, who will show off one of the dishes that helped him win accolades at the two-Michelin starred Restaurant Sat Bains and Restaurant Andrew Fairlie at Gleneagles. MasterChef 2021 champion Tom Rhodes, alongside finalist Laura Michael. Gary Maclean of MasterChef: The Professionals will be cooking live and talking about his new solo venture, Creel Caught at Bonnie & Wild.

As well as the live music stage and VIP tent, Foodies Festival also has plenty of opportunity for tasting and discovering new food and drink, with street food from around the world, stalls by artisan producers, and all-day chilli-eating competitions and food challenges.

Kids can join in the fun at The Kids Cookery Theatre run by SuperChefs.

Since Sue Hitchen's founded the original Foodies Festival in 2006 in her home town of Edinburgh as a local, culinary showcase, the festival has gone on to establish similar events in Brighton, with the first food festival at Hampton Court Palace, Oxford, Bristol, Battersea Park, Clapham Common, Tatton Park, Ripley Castle near Harrogate and London's Syon Park, Blackheath and Alexandra Palace.

Edinburgh City Council has come in for criticism for allowing the Foodies Festival, along with other Edinburgh festivals, for using public space for commercial purposes, in particular restricting access in a public park.

The Foodies Festival was cancelled in 2021, one week before it was due to take place at the National Gallery of Scotland, due to pandemic restrictions.

There is also an Edinburgh Christmas Foodies Festival.