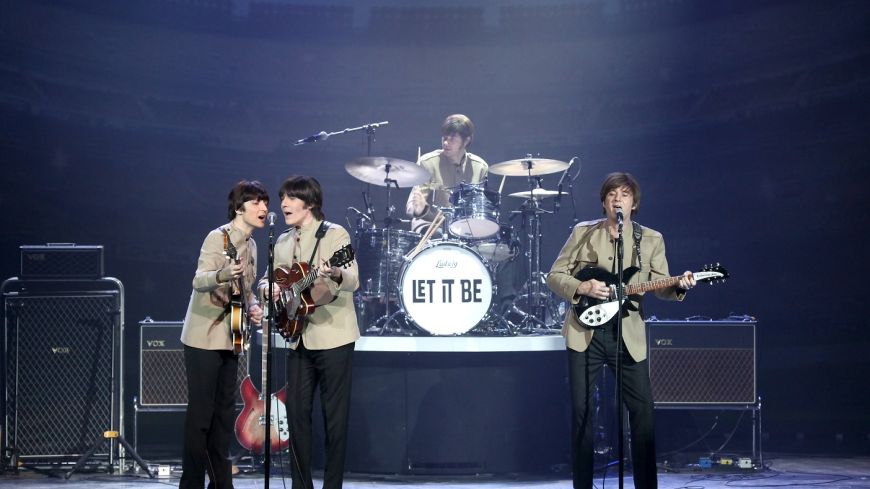 Let it Be the musical is marketed as ‘The Beatles’ show you never got to see’. Well that’s true as what this tribute does is showcase arguably the best known songs from the Fab Four’s vast catalogue, many of which were recorded after they stopped doing live gigs.

If you happened to be riding a galloping horse past the stage and had a backward squint, you could just about believe that you were seeing the original band (or group as they were called by most back in the day). And at that speed you wouldn’t see that the bass player wasn’t always left handed!

The stand-in musicians who take on the roles of John, Paul, George and Ringo have acquired their trademark mannerisms though Ian B Garcia lacked Lennon’s shortsighted, spec-free peer at first, but donning his signature baker boy cap a few scenes in seemed to let Lennon shine, even if he wasn’t always the class clown that he comes across as in this show.

The show’s first half format is a series of sets that go from the band being casually waistcoated in Liverpool’s Cavern Club; being suited and booted for the Royal Variety Performance; in high collared jackets for Shea Stadium then the fantasy of the satin suited Sgt. Pepper band.

Two old fashioned TV screens high on either side of the stage show footage of the periods to match the music and this turns to psychedelic visuals as time goes on. There are a few 'back to the future' references like to Thomas the Tank Engine that Ringo Starr did the voiceover for and some aviary puns after a fine solo acoustic rendition of Blackbird from Paul Mannion, ending with a quip about him starting Wings.

His rendition of the now classic Yesterday is marred by audience participation and the illusion of his sounding quite like McCartney is shattered by the enormous image of the actor being screened.

The band provides some fine harmonies but the version of Eleanor Rigby sounds just a shade too fast to be poignant whereas A Day in in the Life is perfectly paced and the inclusion of the moving In My Life as part of the show’s dedication to the late George Martin who played such a great role in the Beatles’ career is just right.

The lighting, particularly in the second half is pretty harsh with much directed right in the audience with the blinding harshness of an interrogation and some of the visuals like the giant tumbling strawberries are a bit heavy handed. Act 2 sees the band no longer dress uniformly, reflecting the shift in the Beatles’ musical style and their eventual separation. This all works well apart from the John character having to wear such an inelegant Our Man in Havana suit. Different musicians play the parts alternately on the tour.

For anyone with memories of attending actual Beatles’ concerts, and going by the audience age average that could be many, they will know that what ticket buyers went for then was less to hear the music than to experience the excitement and frenzy of seeing THEM live on stage. They had their records at home for the music. The Beatles could have been singing out of tune with toy guitars as all fans cared.

Based on that, this could be seen as a tired, bloodless affair and a bit of a community singing exercise where the audience has to be actively encouraged to dance, arm sway, clap and shout but, in reality, the pastiche is a good excuse for fans to wallow in nostalgia in relative intimacy. Let it Be is exactly what it says on the programme – ‘A celebration of the music of The Beatles'.