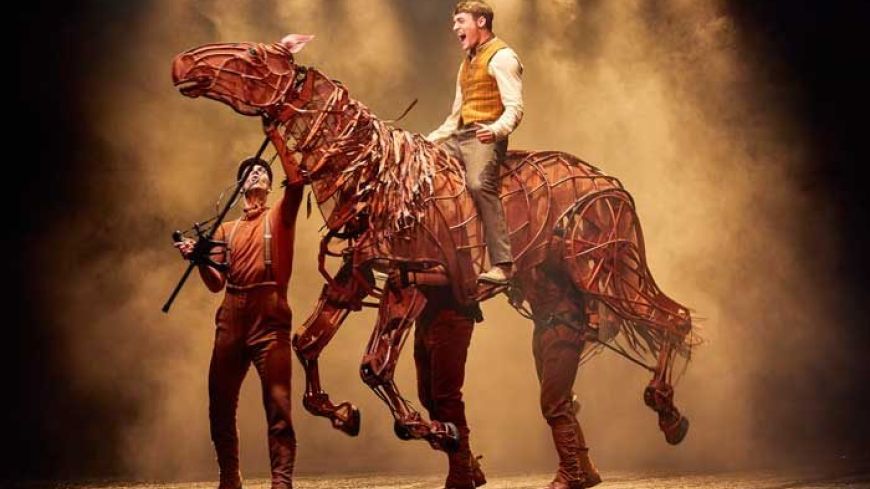 Firmly in the saddle of their 10th Anniversary UK tour, the National Theatre return to the Festival Theatre with their awe-inspiring production of Warhorse, and with Handspring Puppet Company’s ingenious creations at the integral core of this piece it is no surprise that they are still cantering through the country today.

Beginning in Michael Morpurgo’s novel as a story of friendship, reconciliation and determination - as seen through the eyes of a horse - Nick Stafford’s stage production commands its audience to stand on the battlefield with Joey and look around at the painstaking realities of war on both man and horse alike.

To commend any aspect of this production before Basil Jones and Adrian Kohler’s impeccable constructions of the horses would be unjust. Visually appearing to have been lifted from a drawing board of what a mechanical horse would look like, Joey and Topthorn’s designs are not attempting to trick you that this is a living breathing, stand-alone creature - it’s the puppeteers that excel at that. Every snort and tail flick is irreproachable with each movement eradicating puppeteers from your focus as they simply become part of the wonderful character performing onstage.

Although the stage and spotlight has well and truly been stolen by their four-hooved friends, the talent of this production spans throughout the entire ensemble. Thomas Dennis’ Albert Narracott who follows his well-loved hunting horse, the magnificent Joey, into battle is endearing in his childhood, before emitting sheer grit and determination as a young adult to get him back.

Peter Becker’s Friedrich Müller gives an officer who has found himself in over his head a lovable and homely charm - especially when opposite Joëlle Brabban’s Emillie. Performing the front half of the show as the front half of Joey, Brabban’s young French girl imbeds an innocence that cannot be ignored.

Directors Marianne Elliott and Tom Morris’ - now in the hands of revival director Katie Henry - has been scaled back slightly for it’s two year tour - losing its revolving stage - however, it has lost nothing at that expense. Rae Smith’s inspired sketches act as the perfect backdrop to this otherwise blank space, pacing the piece well. As if drawings lifted from Lieutenant Nicholl’s sketchbook, these monochrome drawings become less careful and neat as the war shores on into anarchy. Her only incorporation of colour - red - is a beautiful moment as blood shed melds into men remembered.

In this, the 100th anniversary year of the end of the First World War, there could not be a more fitting time to see Morpurgo’s novel realised on stage in this astounding production.

Running until Saturday 12th May
Tickets available at www.capitaltheatres.com