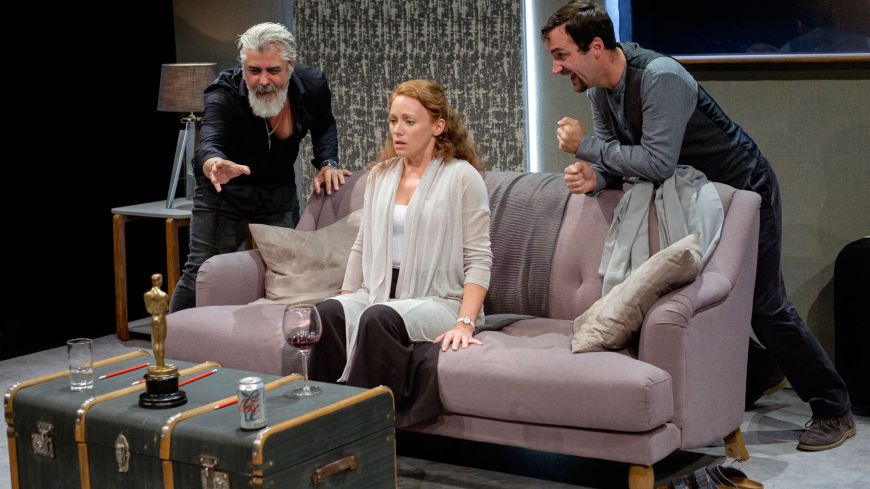 Infuriating, irreverent and capable of evoking the guiltiest laughter that will ever come out of your mouth, Ulster American is a master class in astonishing writing for the modern post-Me Too, post-Brexit world.

A Northern Irish playwright (Lucianne McEvoy) has written a play about the Troubles, and she’s hit the big time with a London production of her piece, helmed by famous American actor Jay, played by Darrell D’Silva. He’s mainly interested in the part because he thinks it will connect him to his “Irish roots,” nevermind the fact that he doesn’t know that Northern Ireland is part of the UK. The English male director, played by Robert Jack, hosts the two of them at his apartment for a meeting the night before the first day of rehearsal.

“No one respects women more than me,” said famed feminist, Donald Trump. The following rage, bewildering ironic laughter and speechlessness that one might feel upon hearing this statement? Those are the exact evocations that Ulster American conjures. With this one, writer David Ireland has managed to capture the nuance of patriarchal patronisation, toxic masculinity, and the horrid “woke misogynist”. Gingerly toeing the line between tastelessness and tactful vulgarity, the discussion of hypothetical rape takes a front seat, and it is unsettling, yet successful, in its delivery. This develops into a full exploration of abuse, consent and control, setting cultural identity on par with feminism through the lens of how an oppressor uses their power and influence to control the narrative.

D’Silva as Jay is overbearing and viscerally cringe-worthy, a difficult character to embody, no doubt, but he delivered impressively. The grandstanding and placating between Jay and the English director Leigh is so telling of how male social politics play a major role in misogyny, and they are fascinating, albeit maddening, to watch. McEvoy is enthralling as Ruth; she becomes Ruth, encompassing her fervour and incredulity. The chemistry between all three makes a crucible of impeccable timing and intensity.

Ending with an absolutely explosive crescendo that is horrific, yes, darkly comic, yes, but immensely satisfying, Ulster American is not one I’d probably see again; my blood boiled just a bit too much, but perhaps you, reader, should have a go. At the punctuating finale, the audience takes a collective exhale, unclenches their jaws, un-hunches their shoulders, and leaves with their eyes quite a bit wider than when they walked in.