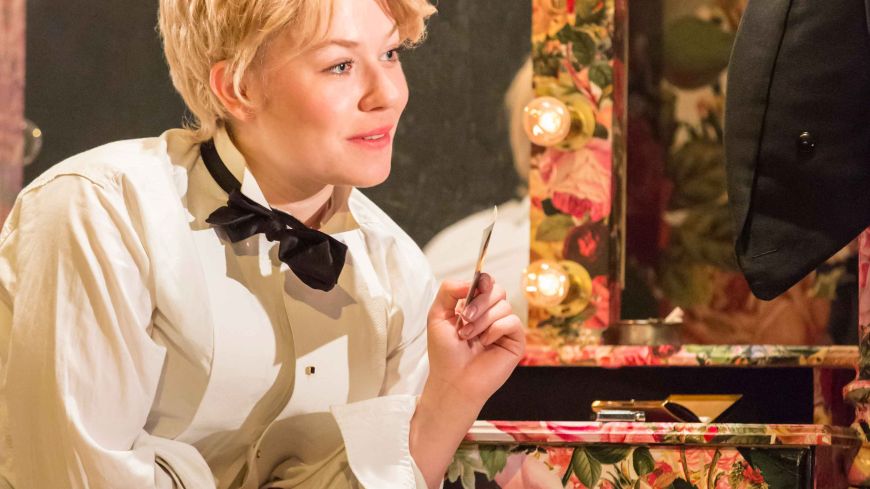 Laura Wade’s adaptation of the 1998 novel from Sarah Waters, Tipping the Velvet, is a grand celebration of theatricality, theatre and in particular the Lyceum Theatre.

The story charts the life of Nancy (Sally Messham) a young Kentish lass from who falls in love with a local version of the Victorian male impersonator Vesta Tilley known as Kitty Butler (Laura Rogers). Her ensuing adventures from Whitstable to Bethnal Green unfold like a series of (better looking!) Hogarth paintings as she turns her back on her safe provincial life to embrace the delights and dangers of London.

The fourth wall doesn’t stand a chance of existing in this bold production as the entire show is under the control of the gavel banging top hatted Chairman, terrifically played by David Cardy. His general asides and descriptions of London then and now are hilarious and this style is echoed in the show’s choice of music. 20th century songs from as wide a range as The Clash and Iggy Pop; Nancy Sinatra and Screamin’ Jay Hawkins are given a 19th century twist by the band of musicians who are part of the cast and sit at audience level in music hall style. He addresses the audience without the politeness of the chap in The Good Old Days but with the all- seeing knowledge of different time zones as he introduces the many, many scenes that lie behind the plush red curtains of the era. He contrasts current “flat whites and chicken avocado” with the coarseness that was Smithfield Market of old, shown in a darkly comic abattoir scene with grizzly porky cadavers from Hayley Gibbs.

In keeping with the style of the entire play, the simple but brilliant sets never let you forget you are in a theatre as they sit on but do not totally inhabit the stage and have a kind of camouflage look, with costumes and set blending as one at times. The massive backdrops that include Victorian scrap book roses, a seascape in the style of McTaggart and an English version of the Bois du Boulogne, where we witness an unforgettable rendition of the National Anthem, are in absolute keeping with the time.

Full of Sapphic innuendo, private language and inevitable cross dressing from the company, this tale of a young woman haunted by love who learns the sore lesson that class will out and unpleasant behaviour transcends gender has a redemptive end. Sally Messham brilliantly portrays the spectrum of Nancy’s life with incredible versatility throughout in this her first professional lead role as she sings, dances, performs aerial silks trapeze, gives a sensual oyster eating monologue and even plays the Ukulele! Her lead début is shared by some members of the Lyric Young Company who also impressively give their first professional appearance.

The Chairman’s magic gavel should maybe have been banged a bit more to fast forward the action in this lengthy show, particularly in the more sober second half. But over this highly inventive piece the exquisitely costumed ensemble produce a fabulous enactment of a young woman being hurled from humble oyster serving through the vagaries of 19th century London life with style and panache. Another great birthday salute to the Lyceum!