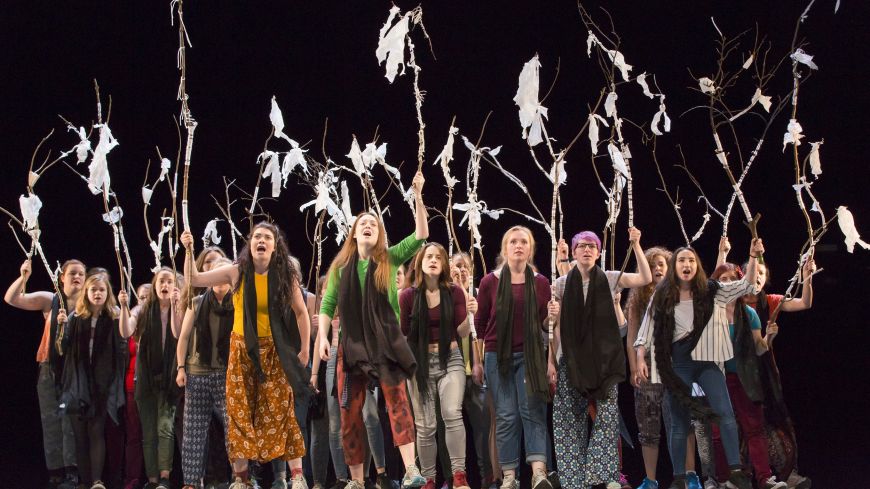 How appropriate that a play first performed in Athens around 470 BC should be revived (nay, resurrected!) nearly 2500 years later in our capital city of Edinburgh, known as Athens of the North. This world première of a new version of Aeschylus’ ancient Greek tragedy, the second oldest play in existence, is David Greig’s first main stage play as Artistic Director of the Lyceum and the play’s first ever English-language production.

The Suppliant Women is the first and only surviving part of a trilogy. It tells the tragedy of the 50 daughters of Danaus (Omar Ebrahim) who are the suppliant women escaping Egypt to avoid marriage to their 50 cousins, the sons of Aegyptos. They cross the sea to seek asylum in Argos where they are greeted by King Pelasgos (Oscar Batterham) who is faced with the dilemma of whether to protect the resolute women that will bring the threat of war or send them back home to their fate. When their aggrieved cousins pursue them to Greece, the King saves them but they are counselled by their father and by the older Wise Women on their conduct from then on in the foreign land that is to be home.

The women’s poignant journey, fantastically embodied by the 36 strong cast of young female Edinburgh citizens, reverberates powerfully from that distant past to present world events where people are daily traversing water to escape some peril and putting themselves at the mercy of strangers. With Gemma May at their helm to steer, and with Sasha Milavic Davies’ smart choreography, they become a focussed and determined team that moves and thinks as one, becoming a massive flag flourish to sorority. They are at once strong and vulnerable; primeval and radical and fiercely feminist.

The Lyceum stage is opened out and stripped bare to accommodate this quite astonishing theatrical achievement and also to accommodate the ceremony of libation to Dionysus, on this occasion performed by Willie Rennie MSP. The translations’ beautiful rhythms of speech are delivered with a clarity that is a pleasure to the ear. The piece is punctuated by a series of incredibly moving laments from composer John Browne whose style chimes perfectly with this new version of an ancient play. Particularly memorable is the lament to Zeus’s mortal lover, Io who comes from Argos and from whom the women are descended. Off stage are some wonderful percussion sounds and amazingly those of an instrument that hasn’t been heard in theatre in over 2,000 years that requires incredible breathing technique. It is the aulos, and for this production, a wooden double pipe based on an original from the Louvre Museum in Paris is played.

The Wise Women who appear towards the end are a more disparate group of 12 older Edinburgh citizens with the odd prima donna bursting to get out. They give counsel on the benefits of marriage over war but the overwhelming message from the young majority is “equal power to our women”.

The Suppliant Women contained the first known use of the word ‘democracy’ and shortly after the play’s original performance, Athenenian democracy was inaugurated. For our times, the new version holds a strong message about the treatment of asylum seekers and the importance of assimilation and mutual respect. And of course democracy. Empowering and unmissable!