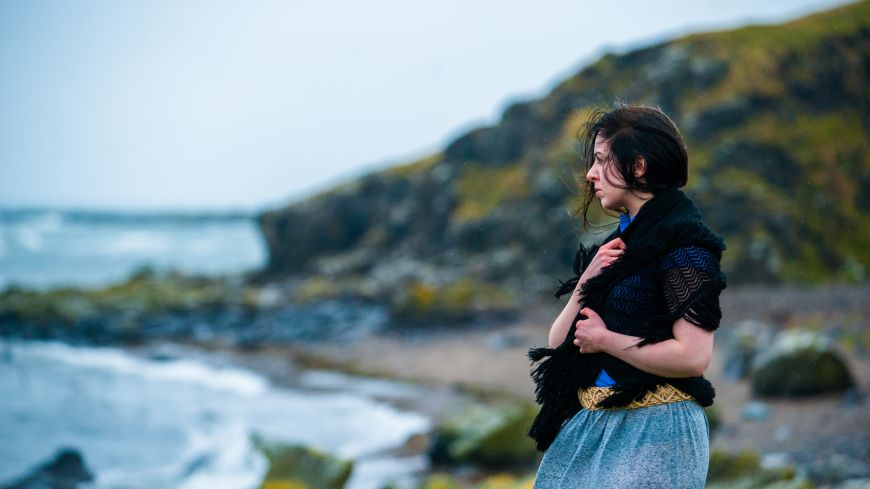 Sue Glover’s 1988 play The Straw Chair is a weaving of two feminine tales. One is 18th century tale of the hideous captivity in the Hebrides by Edinburgh’s Lord Advocate James Erskine, of his wife Lady Grange, whom Dr Johnson described during his Highland travels as “The Uncomfortable Wife”. The other is that of the early and not very ‘honeyed’ marriage of the young Isabel (Pamela Reid) from Edinburgh and her husband Aneas (Martin McBride) the “sticket meenister” who arrive on the island on a summer mission.

The paths of the ingénue Isabel and the raucously imperious Rachel inevitably cross on the island that seems “busier than the Cowgate” and the two women develop a strange and dangerous sorority. The link in their chain is the maid and native islander Oona (Ceit Kearney).

The set of a tongue of grass over a stony mound has a sail- like screen behind held with rigging. Bird sound and crashing waves add to the island atmosphere. The byre that will serve them as manse holds a literally rock hard marital bed - hardly a ‘honeyed’ start to a marriage for the still sea sick young bride. Their one piece of luggage, a kist, sits in one corner and Lady Grange’s memory laden straw chair in the other.

The presence of Rachel, whose circumstances are more plummeted than reduced, is felt fiercely from the start. In spite of her removal from all the trappings of her class, she retains her ingrained superiority with imperious sweeping eyes. She constantly pulls rank by reminding those around that she is highest born despite her Miss Havisham style “raggedy doll” remnants of her former life that are, with the old straw chair, a potent symbol of her obsession and inability to accept her harsh reality. Her larger than life character takes a wanton delight in disabusing the innocent young lass on some realities of sex.

Is Rachel a monstrous madwoman or a deeply frustrated fantasist? Whichever the truth is, Sue Glover has created a kind of monster in the character. She is an unsympathetic wick that has been passionately captured by Selina Boyack as she impotently fights her oppressive isolation.

The quiet, innocent Isabel, who is seen to grow and love the desolate place while finding another freedom through sorority with the island women as well as her own sexual awakening, is sensitively played by Pamela Reid and is symbolically shown by her latter hair loosening. Nice touch, in contrast to the anachronistically gelled hair of the missionary, Aneas, played with earnest positivity by Martin McBride! Ceit Kearney as Oona brings a believability to her down to earth, no nonsense role that acts as another counterpoint to the fiery Rachel.

Glover’s lovely lyrical dialogue is written in Gaelic, English with a smattering of Scots and is accompanied by the beautiful plaintive sounds of psalm singing with pipe and clarsach playing. The play, well directed by Liz Carruthers, is an exposé of the arrogance and need of control of both class and religion over women in particular at the time that holds timeous echoes for the present day.