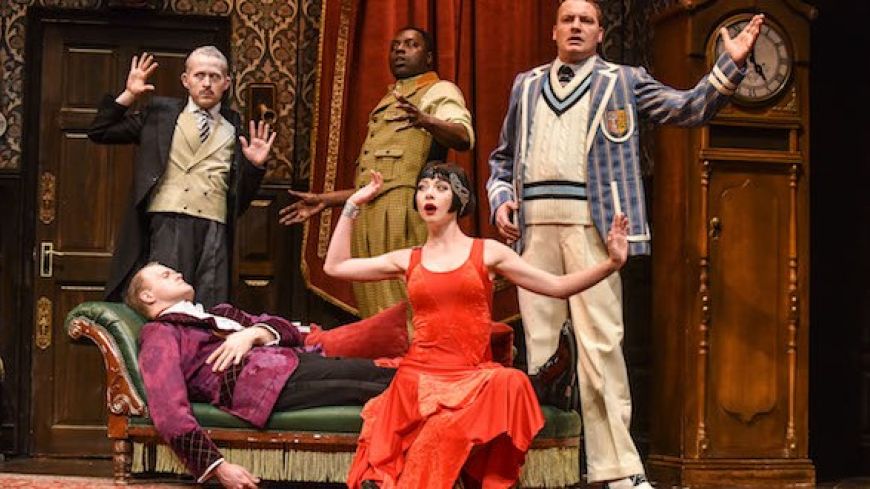 A gut-busting play-within-a-play The Play That Went Wrong brings the lights up on The Cornley Polytechnic Drama Society, having emerged from their, admittedly, problematic past productions of Cat and James and the ehhem.. Peach to try their hand at a whodunnit: Murder at Haversham Manor.

Set malfunctions, spittakes, and slapstick run rampant in this production that is an absolute farce of theatre and Agatha Christie-esque scripts. Delivering meta-theatre throughout every aspect of the performance, the Cornley Polytechnic Drama Society have also sellotaped their own Murder at Haversham Manor programme within the evening’s Festival Theatre programme, which is a laugh and a delight.

This amateur theatre company’s ringleader, Chris Bean, has listed himself under no less than twelve credits including production, creative, and managerial, to name a few. Very Tommy Wiseau’s “The Room.” In the house before the play begins, bits of improv between the actors take place in and around the audience. A techie can’t find his Duran Duran CD; an actor has lost Winston the dog, who is meant to appear in Act II.

Following a brief introduction by the Drama Society leader, the game’s afoot: “Charles Haversham has been murdered!” Was it the butler? The fiancée? The inspector? The gardener? Two acts and countless moments of set disasters, embarrassing on-stage blunders, and even risk of peril will eventually reveal the answer. In the meantime, sit, back, audience, and bask in the hilarious fourth-wall breaking hilarity of this production.

Some of the best parts of this performance are the personalities of the actors at The Cornley Polytechnic Drama Society that emerge despite the entire play consisting of them performing as the cast of Murder at Haversham Manor . There’s the drama queen, the eager stagehand, the ham, the nervous one, the over-actor. The schtick is constantly laugh-out-loud for most of Act I, but finds itself redundant as the mishaps begin to become predictable.

The Play That Goes Wrong received its debut at the Duchess Theatre on the 3rd of Sept, 2014, and the demand for satirical, farcical, plays-about-awful-plays has only grown since then. Mystery and malfunction, with impressive, choreographed set failures by Nigel Hook, complete with a motley crew of amateur theatrics makes for an evening that will make you sit up in your seat with the giggles.