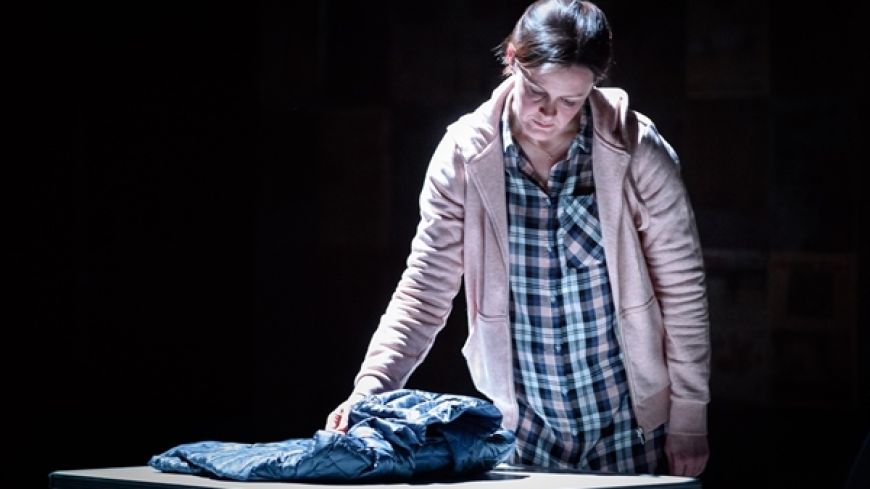 The unspeakable tragedy of losing a child lies at the heart of this Frank McGuinness’ 2012 monologue The Match Box. McGuinness is known for his many adaptations of classic works as well as his acclaimed play Observe the Sons of Ulster Marching towards the Somme and this Scottish premiere from the Irish Tony Award winning playwright has been touring in a co-production between three Scottish companies, Firebrand, The Byre and Heart of Hawick.

Sal (Janet Coulson) is the daughter of Irish immigrants living in the north west England. While still a schoolgirl, she gets pregnant to a man who abandons her before her baby, Mary, is born. When just twelve, Mary is killed in a random, cross fire street shooting that leaves her mother ‘dry eyed’ but with a hole where her heart used to be. The talk in the town is that the shooting was done by three brothers caught up in a personal, possibly drug fuelled dispute whose mother gives her boys an alibi and even sends Sal a condolence card.

Sal’s intense, personal and painful journey, whose path is signposted with both revenge and forgiveness, is narrated from Valentia Island off the coast of County Kerry where she and her elderly parents have returned. Whether that return is so her father could die in the land of his birth or that Sal and her parents could escape the inevitable vengeance of the ‘match to the thatch’ that killed two of these brothers remains vague. What is clear during this dramatic prose poem, is that either way the fearsome Sal has learned to inhabit her own internal hellfire.

On a stark stage, where a red fire bucket is the only bright colour apart from the red top tabloid pages that paper the back wall, making them look like a series of stacked match boxes, Coulson gives an unsentimental performance of Sal that is both fierce and gripping across the 90 minutes. Under Richard Baron’s concise and measured direction, she skilfully slips in and out of the characters, and all their various accents, that feature in the text. The syncing of sound effects with her continual match striking is discreetly impressive in its precision. Equally notable and subtle is the open- handed pose struck by Coulson, mimicking the classic image of the Virgin Mary, a mother whose child was also brutally killed.

This stark tragedy poses moral dilemmas that demand self -enquiry.