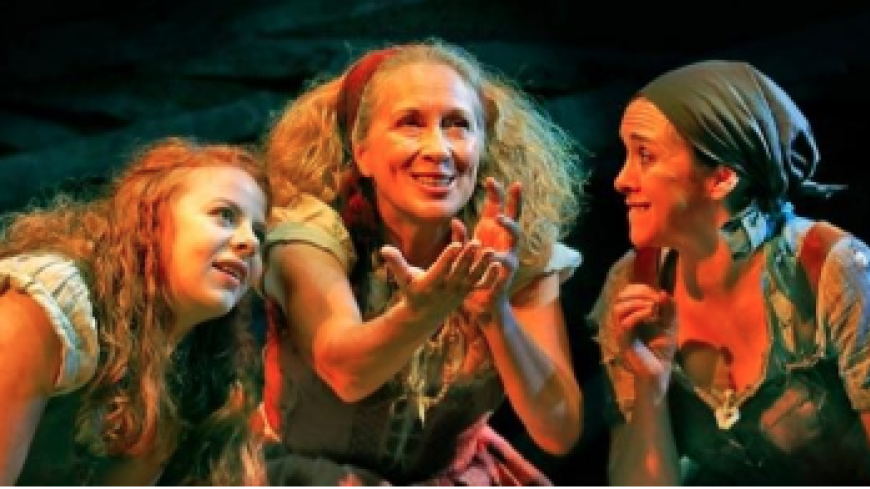 Fire sets upon the small Scottish village of Dornoch in 1727 as Janet Horne is burned, the last witch in Scotland executed. Janet is a fiery, albeit quick-tempered, woman with imagination and experiences far greater than her small town can match; she feels tethered to place and poverty by her daughter and by her circumstances. She holds the power of insight and a sharp tongue and possesses the talent of persuasion, striking fear in her neighbors and convincing them of her abilities to breathe life and death into their livestock and their hearts. But is this magic real or manufactured? Do the church and state bring Janet to her end for her powers or for her pride?

This gripping thriller opens with an eerie liturgical choir, foreshadowing the religious overtones that inevitably take Janet Horne to her final moments upon the pyre. But this is no Crucible. The themes in Rona Munro’s The Last Witch play upon female sexuality, mothers and daughters, and the notion of power, and what happens when a woman is seen to hold too much of it.

Ken Harrison’s set is mesmerising, a gigantic full moon shining down on cracked earth, both tilting towards the other. His costumes have the same effect, the crimson of Janet’s dress revealing her fire as well as her fate. Janet’s otherworldly passion is barely contained by magnetic Deirdre Davids, who is enveloping and bouyant as the protagonist. She exudes the seizing, sexual and formidable nature of Janet, balancing the dialogue, humour and rich poetry of the script to illustrate a woman that is both believable and magical. Ginger-haired Fiona Wood as Helen is formidable in her own right, communicating the physical deformities of Janet’s daughter without under- or overstating them, all the while making you wonder whether she did, in fact, call the devil and whether she could actually be the last, and real, witch of Scotland.

Atmospheric and melodic music resound from instruments played offstage, and harmonies befitting the Sunday rafters echo around the piece, the effects conjuring up images of battles, rolling waves and the wind through moonlit fields. If you come expecting a spectacle, you will be satisfied.

Billed as “ambiguous,” The Last Witch certainly delivers on that promise; there are no answers for you as to whether or not there are any witches counted in this tale. While there is plenty of magic to behold, the story, written in 2009, yet fiercely relevant to today’s silencing of women, endeavors to ask why a man’s word can be held to higher esteem than a woman’s life, especially if that woman fits the description of outspoken spitfire. Rona Munro’s bewitching script captures a world and a woman that are wholly realised, visceral even, while shifting in and out of poetry that serves to show colour, meaning and mysticism of 18th century Scotland. While Janet Horne professes that, with magic, “the words aren’t the charm,” for this piece, they certainly are.