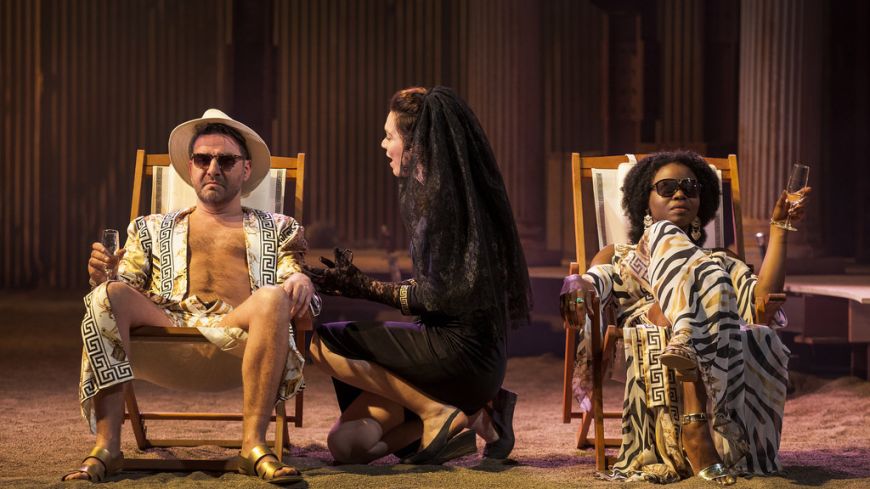 Set in and around ‘windy Troy’, Chris Hannan’s re-imagining of ‘The Iliad’ opens bathed in a sunshine that belies the events about to unfold.

Mark Thomson’s final production for the Royal Lyceum lacks nothing in ambition and can justly boast a cast containing some of our brightest contemporary talents, who do full justice to the depth and vibrancy of Hannan’s text.

In making the gods our guides to the action, Hannan shrewdly puts them in them in their place, inside the minds of the Hellenes, at the same time pointing out how much of a disappointment an imaginary deity can be in real life.

So Richard Condon’s Zeus is an ageing playboy lounging in perpetual sunlight leaving Emmanuella Cole’s Hera to vent her spleen by plotting a vengeance in which mortals are no more than counters in a game over whose outcome they have no more control than of their own emotions.

If the gods offer an oversight of this tragedy of revenges, the human players become uncomfortable mirrors to our own worst selves - egotistical, peevish and petty by turns – preventing humanity’s better side emerging more than occasionally.

When Agamemnon (Ron Donnachie) demands Briseis (Amiera Darwish) from Ben Turner’s Achilles, he unwittingly precipitates a quarrel that will cost lives, including those of Patroclus (Mark Holgate) and Hector (Benjamin Dilloway).

Yet as with Homer, Hannan ensures that it is not only the classic duel of pro and antagonist that remains in our minds, but the ultimate futility of war and the so-called ‘collateral damage’ to the innocent and unwilling that stays with us.

Hannan quotes from the original in a variety of creative ways, and a number of the exchanges in this production seek the heart of Homer’s vision, not least those between Hector and Andromache (Melody Grove), while also wisely following Homer in leaving the nature of Achilles’ and Patroculs’ relationship undefined, the nature of these being such as to render all of us inarticulate by their very variousness.

Although by their very nature all attempts to translate work from one medium to another are, by definition, a form of treason, Hannan’s stage adaptation is a remarkable achievement by any standard and on many levels. If it necessarily cannot fully convey the profoundly anti-war sentiments of the original, it nonetheless convinces as a communication of its deeply human and humane perspectives.