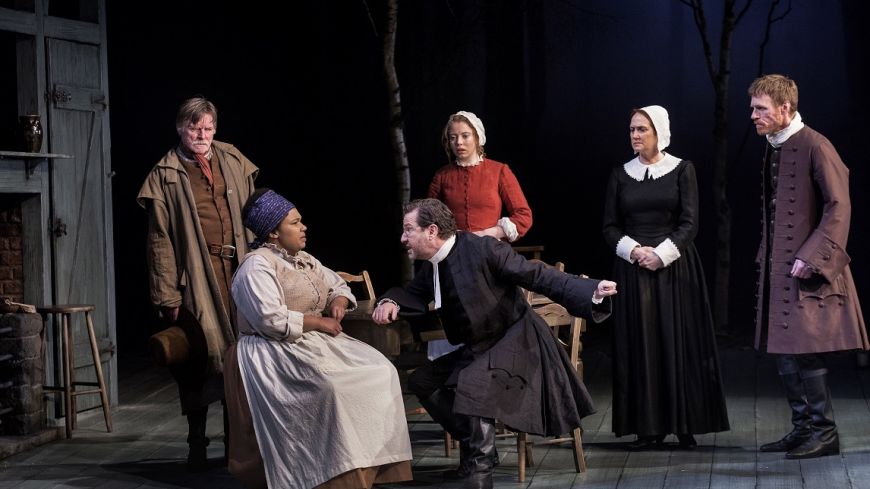 Fear and whipped up hysteria is evident from the first scene in Arthur Miller’s four act play The Crucible that was first produced in 1953. Miller uses the story of the 17th century Salem witch trials in Puritan New England as a metaphor for American Cold War McCarthyism. This was a time when people in public positions, especially in the world of cinema and entertainment, were hounded and punished for so called un-American activities, as recently dramatized in the film Trumbo.

Director John Dove exposes the play’s relevance through sympathetic direction as bullying, scapegoating, deflection and rat packing come in to play when personal survival is at stake. But it is the denial of the frailty of ordinary human behaviour when personal values are pitched against the weight of law with terrible consequences that is at the play’s pinnacle. The dilemma of the characters John and Elizabeth Proctor (Philip Cairns and Irene Allan) brings real focus to the play throwing into relief the human consequences of non- conformity as Proctor delivers the prophetic words “Gods’ icy wind will blow!”

Their agony in trying to do their best for each other and the ensuing tragedy of that is the final straw for the witchcraft expert, the Reverend John Hale, played centre stage and with such committed passion by Richard Conlon. He witnesses sanctimonious, driven men imposing distorted values and focussing on petty transgressions while real villains slip away under their noses. As Burns wrote in his poem, Address to the Unco Guid

“O ye wha are sae guid yoursel',
Sae pious and sae holy,
Ye've nought to do but mark and tell
Your neibours' fauts and folly!”

In a subtle but effective set from Michael Taylor, three giant birches standing on set perfectly hold the dual meaning of renewal and stability, their shadows fading to create an equally symbolic unknown forest beyond. The neat and orderly domestic setting to the fore with its prim high collared inhabitants, has stiff upright beams reaching as high as the moral ground on which the city fathers sit. Philip Pinsky’s tense wavering strings and drum beats create a restrained yet powerful atmosphere to the drama.

This is a wordy and mighty play with a salutary message of the dangers of zealotry from any belief system that is as powerful today as ever showing righteousness as the enemy of ordinary flawed humanity and with everyone is under suspicion. It holds the irony of those seeking order creating a hideous disorder with unkempt fields and roaming cattle when so many of the populace, mostly female, sit in jail awaiting the gallows.

It is testament not just to the play’s universal message but to the high quality of this ensemble production from the Lyceum that the 2 hours 40 minutes of its duration can hold unwaveringly throughout. Another proud notch in the Lyceum’s 50 year old belt!