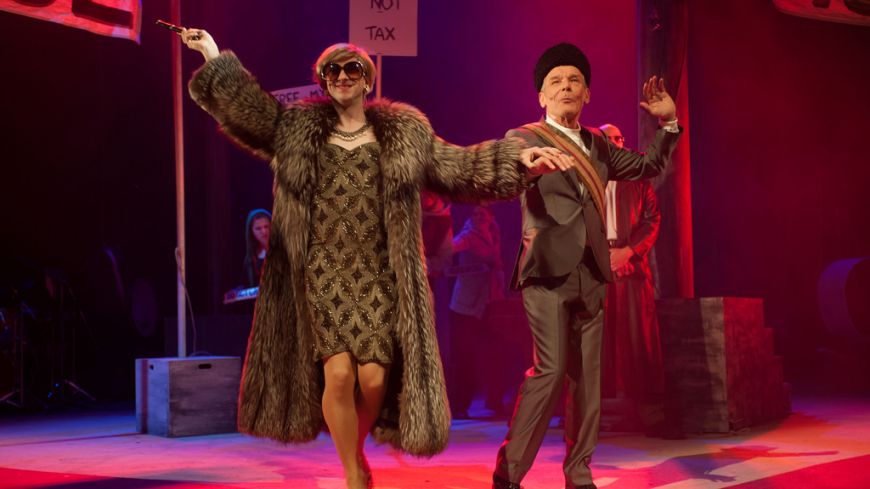 “Terrible is the seductive power of goodness”. That’s the message that lights up the stage for this fantastic production and adaptation of Berlolt Brecht’s classic piece of epic theatre The Caucasian Chalk Circle.

And that is the core message of this astonishing play. The scene is a revolutionary war zone and the grand duke (Christopher Fairbank) and his wife (Jon Trenchard) are fleeing to safety. So concerned with what clothes to pack, the wife ‘forgets’ to take her infant son Michael (Adam Bennett) with her.

His mewling cries are heard by a servant girl Grusha (Amy Manson) as she herself is trying to escape danger and she stops in her tracks. Taking the child with a ransom on his head is asking for trouble but her heart is moved and she takes the child and raises him with love as her own in spite of the string of hazards this invites in to her life. When the troubles pass and the duke’s widow re-instates herself in power, she demands the return of her son. Who will win? Nature or nurture? The decision is reached in a court version of Solomon’s judgement – placing the child within a chalk circle to see who will pull the hardest to win him.

From the get go and in true Brechtian style the fourth wall is well and truly smashed with musicians playing from the theatre’s boxes and actors marauding across the front of the stalls. The deep open stage is filled with miscellany including costume racks at the back that accommodate many character changes that take place. With the exception of Amy Manson, who brilliantly and movingly plays Grusha the servant girl throughout and singer Sarah Swire, who provides musical narration through the genres of grunge, folk, blues, rock and tango, this magnificent 13 strong cast takes on the mantles of what seems like a ‘cast of thousands’. It is almost impossible to single anyone out from this stellar line up but Shirley Darroch, Deborah Arnott and Christopher Fairbank were exemplary in every role. The cat’s cradle of words between soldier Simon (Buchan Lennon) and Grusha was a mini heartbreak to watch.

In exposing theatrical process by throwing in to high relief rather than creating illusion, the incredible design from Karen Tennant and superb lighting from Simon Wilkinson has combined to create strangely believable zones to host the exquisite chaos that is The Caucasian Chalk Circle. Alistair Beaton’s contemporary translation with Mark Thomson’s direction and Claire McKenzie’s music make for a rollickingly outstanding production of this pin point commentary on class with lines like “if they think you can wipe your own arse, you’ve had it” and a fine wee lesson to an aristocrat on how to eat like a poor man.

This subversive exposure of humanity’s corruption along with its potential for good and ill is timeous in our own troubled times when horrific events that should have been consigned to history are live on our screens. It shines a light on human failings in all their comic ridiculousness without losing hope. A rare trick!