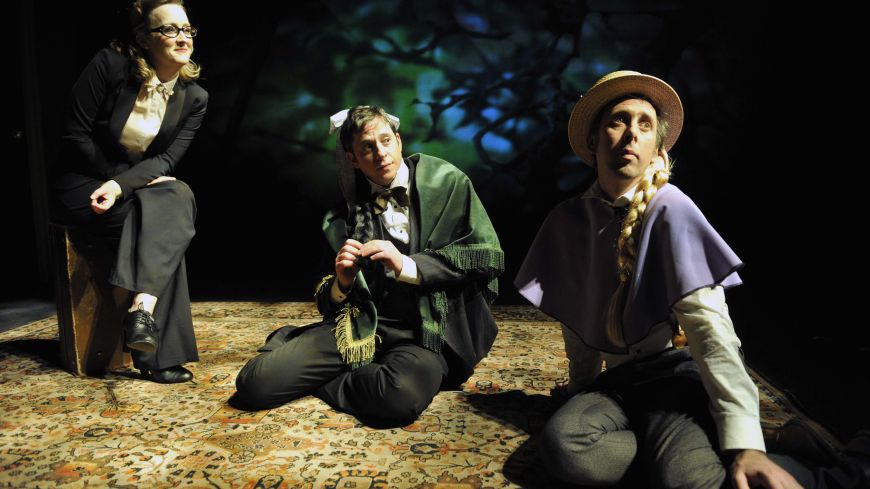 Forget fairies and elves; toys and tinsel; stockings and Santa Claus, in fact all things linked to the spirit of Christmas. But keep the idea of spirits in mind - not the cooking sherry for the trifle or the brandy for the pudding, but spirits from the other side. Oh, and keep in mind the idea of having lots of childish fun and don’t forget fairies entirely!

In 2007 Peepolykus had a hit with their spoof of The Hound of the Baskervilles, also written by Steven Canny and John Nicholson, that broke box office records at the West Yorkshire Playhouse before a West End run and thirty international tour dates.

Continuing their clear fascination with Sherlock Holmes, the comic theatre company’s latest production is a wacky tribute to Edinburgh born Sir Arthur Conan Doyle, creator of the ultra- rational and much loved sleuth, and is part of the Traverse’s now four-year tradition of offering an alternative show at Christmas time.

We are the audience at a lecture tour led by Ph.D student Jennifer McGeary (Gabriel Quigley) on the anomaly of the belief in spiritualism by Sir Arthur Conan Doyle, creator of arch rationalist, Sherlock Holmes.

In self–referential style, the three-strong cast of Peepolykus do not so much break the fourth wall as kick it in with a giant comedy boot. Taking on the roles of the multitude of characters, with all three at some point playing Sir Arthur, the production weaves through time on this ‘Voyage to the Unknown’ with absurdist aplomb.

The portrayal of the fakers of fairy photos, pigtailed Elsie and Frances, by John and Javier was particularly funny. The writing from Canny and Nicholson is jam packed with smart apparent improvisation reminiscent of the superb zaniness of Reeves and Mortimer. Like any entry to the world of the ridiculous, full enjoyment involves the suspension of disbelief as the company throws the illusion of theatre in to high relief with bumbling Borgesian splendour.

The backdrops of a fine Edinburgh skyline or the howling home of the Baskervilles, as well as Sherlock’s familiar Inverness cape and deerstalker set like a comic strip against a scarlet screen, are only part of the impressive technical elements of the play.

Harry Houdini made an appearance played by John Nicholson who performed some jaw dropping tricks and illusions, no doubt under the instruction of illusion designer Ben Hart.

Javier Marzan is a consummate clown who seemed to have all the best lines, and was the perfect vehicle for the hilarious puns and malapropisms given to his characters.

Fight scenes between the two start off with them giving each other Big Lassie Slaps but are smoothly directed to what looks like the real thing, or at least as close as anything is real in this absurd world of Victorian smoking jackets and spooks.

Gabriel Quigley is the perfect foil to the two male buffoons, while being completely part of the general wackiness and physicality of the piece.

The incongruous set of Jim Reeves songs that entertains the audience (or not!) before the start of the show set the tone for expecting the unexpected in this thoroughly entertaining non-Christmas show.