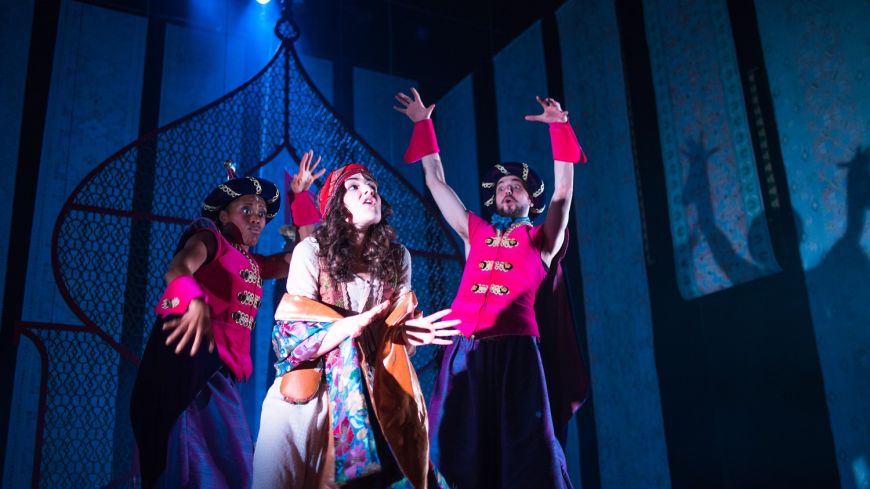 The subdued and calming designs on the hanging cloths that drape the sides of the Lyceum stage totally belie the riot of colour and magic that is about to erupt in this world première of a new adaptation of The Arabian Nights by Suhayla El-Bushra.

As soon as the two bony, raggedy talking dogs clack their wooden paws across the stage, and start their own story, there’s a sense that a very special treat full of eastern promise is about to unfold. And boy did it do just that!

In a blink, the stage is transformed to a lively colourful market place in old Baghdad that, courtesy of Mark Doubleday’s exquisite lighting design, is bathed in warm yellow lighting that evokes a desert sun, shifting to a shadowy interior in the second half. Here stallholders punt and sell their varied wares and even dare to say that the Sultan has a face like a bum! When said Sultan (Nick Karimi) overhears the seditious chants, he orders all and sundry to jail leaving (of course!) the market sans sellers; sans goods. Witnessing this is the young Scheherezade, whose Mum is one of the new jailbirds and who goes on a rescue mission by mesmerising the Sultan with an array of tales designed to melt his hard heart to one as soft as lokum.

The warp and weft of familiar tales like Ali Baba, Sinbad the Sailor and Aladdin and less well-known cautionary ones like the Dashing Boots are woven together wonderfully well to create rich and sumptuous material. Add to this the spectacular shadow puppets and silhouettes and the boy monkey’s magical transformation and the appearance of genies before your very eyes under the watchful eye of magic consultant Ross Mackay and you have a unique festive show superbly directed by Joe Douglas that’s bursting at its silken seams with some seriously good entertainment of singing, dancing, comedy, magic, clowning, suitable irreverence and lots (and lots) of farting jokes. Prepare never see dungarees in quite the same way again.

Rehanna Macdonald makes an impressive Lyceum debut in starring role of Scheherezade and Brian James O’Sullivan shines like a burnished lamp in each of his many roles. I defy anyone not to have their socks knocked off by the daft pair of musical goats that he plays with Humera Syed. Patricia Panther’s evident enjoyment of every moment in all her roles is a delight to see. Each character is resplendent in gorgeously realised costumes designed by Francis O’Connor whose set includes an ingenious manifestation of the cave of thieves’ treasure and a series of sliding doors in Sultan’s palace suggesting the maze that Scheherezade finds herself navigating to find her Mum. Look out for some creative knitting in the costume of BooBoo the Sock Genie played with comic skill by Neshla Caplan.

There are stories within stories, like the narrative version of Russian dolls, that make for a kaleidoscopic delight and demonstrate the immense power of the parable and fable. Scheherezade’s own story comes full circle creating redemption without a cheesy and predictable wedding ending, making the all-round gloriously entertaining piece of ensemble theatre that is The Arabian Nights a treat for all ages. It hits every note and is literally fabulous!