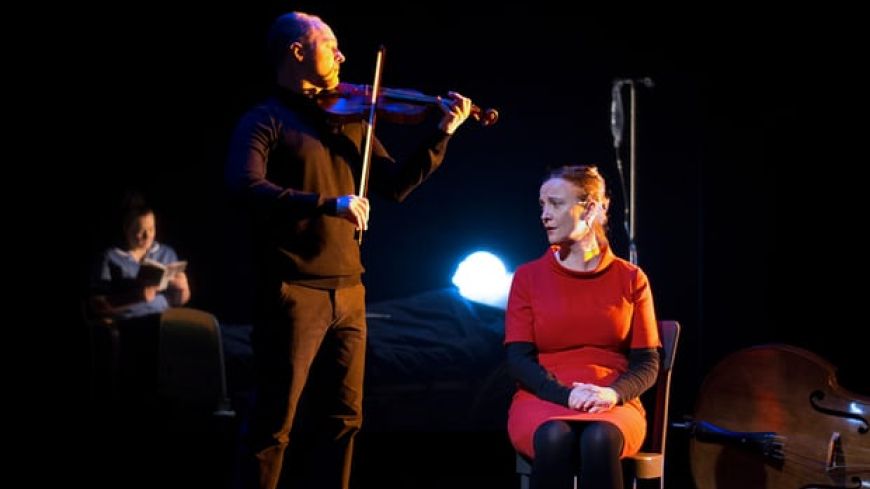 Named for the album played constantly in one man's last days of fighting his losing battle with cancer, Tabula Rasa is mystical gig theatre, an imagining of humanity's negotiation between life and death by way of an hommage to Arvo Pärt's solemn and profound music.

Apparently Arvo’s music is particularly profound for those in their final days on this earth, thus the premise for this multi-genre work incorporating monologue, string and piano performance, and contemplative selections read from Marcus Sedgwick’s Snow .

An upright piano, prepared grand piano, three chairs and a cello create the set, paired with reflective flooring and a fluorescent hospital light hanging overhead. A man appears in the background, as if already an apparition; a woman in a bright red dress delivers bits of stories about the final moments for her friend Peter. Wrought with dark humour, Pauline Goldsmith is a natural storyteller, her no frills tales about the reality of death and dying feeling like she's had the entire audience over for a cuppa.

Arvo's music bookends Goldsmith's monologues, the pieces themselves conveying the juxtaposition of life's opposites: of two friends, one living another dying, of black and white, of piano and forte, of good and evil, of music and silence. This merging is felt viscerally in the “tintinnabuli” form of musical composition throughout the evening, a philosophy that melody and accompaniment become one. “One and one, it is one - it is not two,” remarks Part.

The pieces are chilling, ominous in their simplicity and repetition, quite, well, grave, in feel. The violinists in their concert black feel like Valkyries, wielding their bows and carrying death, at once both noble and terrifying, on the lilt of their phrases. One piece feels like a lullaby, bringing in yet another dichotomy of birth and death. Another features three consequent sections of a song repeated at length: the first section frenetic, the second melancholy and drudging, the third culminating in a chime from the prepared piano reminiscent of a clock's. One piece features a cello's final note standing alone, the resounding fermata eerily like a flatline. Lead violinist and conductor of one pieces ends another final note as the scrim closes on an empty room flooded with white, sterile light. Arvo's pieces are mesmerising, stoic and ethereal.

White is a common thread throughout this entire performance. The glowing white head of the every-patient lying in the hospital bed. White. Simple, both at once containing all colours and no colours at all, much like Arvo's compositions, at once minimalistic but at the same time full of weight and esotericism. White. White like snow, it is also containing many dualities. Light and heavy, cold and warm, unique but part of a collective.
White. The colour of mourning for many cultures.

Tabula Rasa communicates so many threads of metaphor, teetering on being too ambitious in its delivery. There are metaphors of snow and its beauty and perishability, of the dualities of life, of the importance of care (especially throughout several poignant 'Ode to a Nurse' type pieces throughout), but the overarching message is the importance of music and art in humanity's ultimate hours.

Just as Goldsmith decrees in the first funeral monologue, "There was music...and it was fabulous."