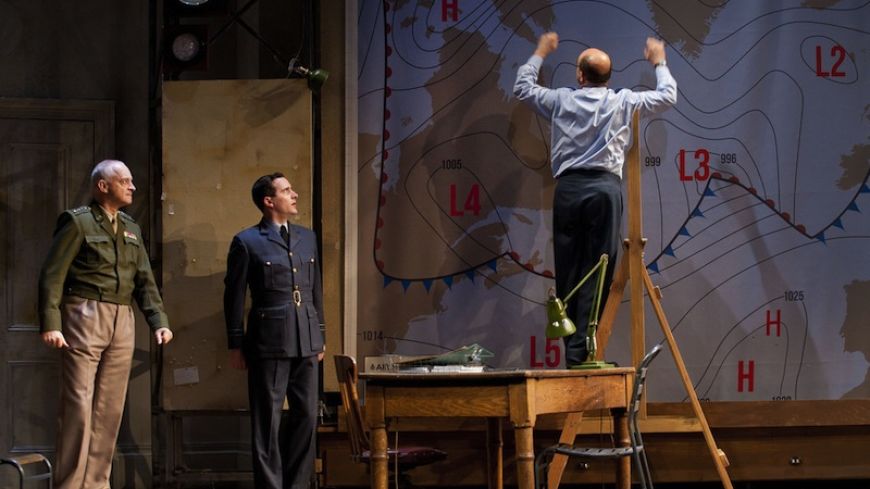 Four years after Pressure premiered in Edinburgh at the Lyceum in 2014, the play returns to the city with David Haig once again at its head.

This time the King's stage is home to the drama set in World War II, on the brink of the D-Day landings. As well as playing the lead, Group Captain James Stagg, Haig is also the playwright and was at first reluctant to step in as an actor, for fear of playing an authentic Scot. The glowing response four years ago seems to have negated those fears, for in this production, Haig reprises the role of Dr Stagg, Chief Meteorological Adviser to the Supreme commander of the allied forces in Europe; which is far more gripping than it sounds.

Pressure takes place over a 72 hour period before the D-Day landings on the 6th June, 1944. General Eisenhower (Malcolm Sinclair) is responsible for the lives of 150,000 troops and the decision to go ahead with the planned D-Day landings on the 5th of June. He is advised on weather patterns by the allied forces; Dr Stagg, a Scot, and Colonel Krick (Philip Cairns), an American, who have very different ideas of how the weather will unfold.

Where Krick uses historical scenarios to back up his theories, Stagg stresses that he must have a more 'three dimensional' understanding of what he is dealing with, and consider the pressure in the upper atmosphere and the force of the winds above the surface cloud. This three-dimensional view is a clever metaphor not only for the audience, but as an understanding of the war in general. It is not often that a meteorologist takes centre stage.

As the clock ticks down towards D-Day, a decision must be made. Much rests on the outcome; if the weather is as Stagg predicts many lives will be lost and the landings will fail. At the same time, Stagg's wife is in complicated and very dangerous labour, suffering high blood pressure. The stakes have never been higher.

Haig explores a fascinating and vital military operation from a very human perspective. Stagg's character is both sympathetic and passionate, and well aware of the gravity of the situation. Lieutenant Summersby (played beautifully by Laura Rogers) plays an important balancing role at the heart of the play and consolidates the strengths of the officers around her. The tension onstage is tangible, and there are several moments when not a sound is made in the entire theatre while everyone holds their breath.

The play keeps its audience on side as several characters openly do not understand Stagg's charts, and learn at the same pace as the audience. By the time the final chart is raised, everyone knows what it means and without saying a word, a cadence is reached.

The play takes place entirely within one office. Time is irrelevant. The set and lighting are beautiful and used to great effect to show the passage of time, weather, and mission. The acting is superb and intense. It loses pacing somewhat through the second half which is noticeable because of the high energy scenes that precede it, but there are some important sentiments made and the shift in pace is forgiveable.

Pressure is beautifully crafted theatre of the most important weather forecast ever undertaken.