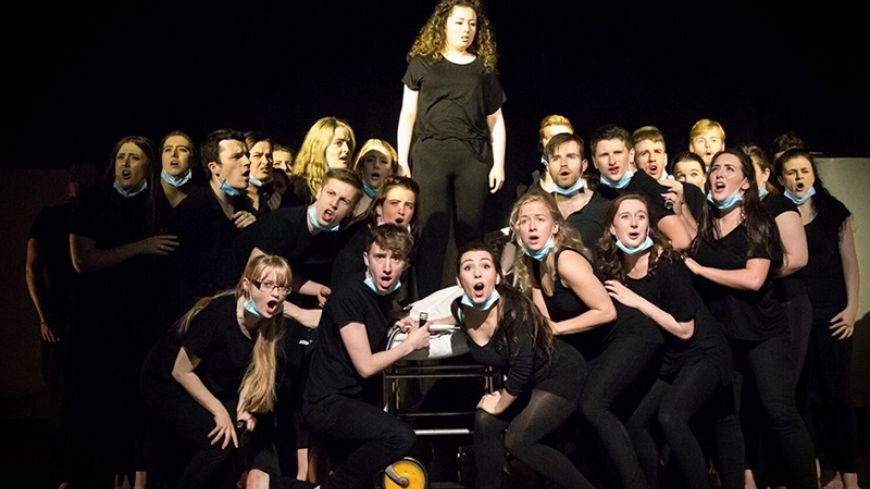 As part of Edinburgh’s GLOW Festival 2018, the graduating students of Performing Arts Studio Scotland return to the traverse with PASSout 2018. Under the direction of industry professionals, they tackle the theme of ‘Revolting’ and what that means to them.

This year, the HND Acting and Performance students have worked alongside directors Pauline Lockhart, Laurentiu Blaga (National Theatre, Romania) and Tony Cownie to produce three short pieces. Created over merely 9 days, and within 24 hours the class of 2018 revolt against today’s society with notable intensity, humor and energy.

We Rise combines physical performance, dance and music with small sketches, offering the competent ensemble to flit between multiple roles. James O’Neil and Abigail Campbell’s musical duet sticks in the mind, whilst Jade Chan’s still moment unravelling a story of fleeing North Korea with her mother is difficult to forget.

Tony Cownie’s injection of bare faced humour in Not Giving A Flying F*** magnifies stereotypes, as found in an airport lounge. When flight “WTFM8” to Edinburgh is delayed the eclectic mix of characters, under charge of Poppy Smith’s hilariously dry witted flight attendant, are forced to keep each other company.

The final piece, as directed by cutting edge director Laurentiu Blaga, Numb Crescendo follows the cast along a journey of discovery - what does ‘revolting’ actually mean in their everyday lives? How does the act of revolting impact their own existence?

A quick 75 minutes is spent with the 35 PASS graduates as they showcase their year of hard work, with a high standard of performance throughout. Now, a new batch of actors are on the loose - and they are revolting!

Running until 24 May at Traverse Theatre, Edinburgh