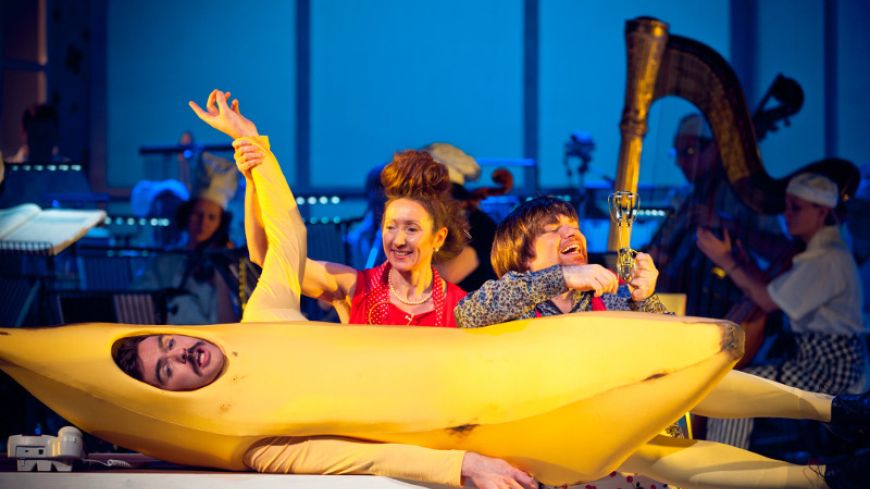 As this reviewer’s Jewish director friend has said, ‘There’s nothing wrong with entertainment.’ Indeed, though it depends what you mean by ‘entertainment’.

Pass the Spoon promises well – who could resist an operatic pantomime peopled by puppets and lushly scored? Yet in trying to stretch across both forms and genres the resulting production felt both thin and sometimes flat.

Another friend observes that ‘food’s important’. Unfortunately, the end result of June Spoon and Philip Fork’s attempts to satisfy Mr Granule’s gustatory longings, which made up the major plot line, seemed a metaphor for the show itself – a lack of underlying ambition and a disappointing result.

This is a great pity, as the potential to play comedicly with our obsessions with celebrity chefs, gastronomic expectations and satisfactions, fast food and slow food or to seriously satirise these are largely unexplored.

Although undeniably operatic during some of its better moments, Pass the Spoon also disappoints somewhat in its attempts to create a genuinely cross-genre piece of theatre. The few instances where this can be said to work (Peter Van Hulle’s Butcher is a notable instance) are too few to allow the show to be seen as opera as we do, or might wish, to know it.

There are, it must be said, other good things, particularly Red Note Ensemble, whose musicianship and interpretive abilities deserved to steal the show. It was a pity they didn’t get away with it, especially toward the end, when June Spoon is rescued, principally by a racially-abused Banana, from the abdominal tract of Mr Granules. Any classically-trained Freudian analysts in the audience would probably have found much to shake their heads over on the way home.

Pass the Spoon has built up a considerable fan base in its short life, evident on the night seen, when audience response was both positive and enthusiastic. However, the show has the sense of being designed very much with the touring circuit and the expectations of its financial backers in mind. Theatre can never afford to ignore its audiences nor monetary constraints. At the same time, it must challenge both, often by unapologetically erecting a mirror in the face of comfortable prejudice and presumption.

If Pass the Spoon was on a menu, it might look rather like one of the more pretentious examples of the Cuisine Nouvelle era, flashily presented but disappointingly lacking in substance.