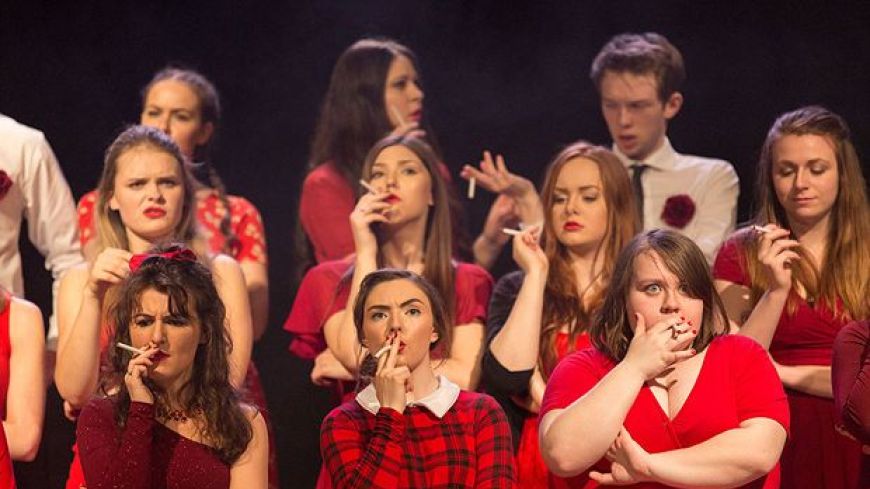 Edinburgh College’s Performing Arts Studio Scotland brings their showcase for graduate actors to the Traverse Theatre, performing a series of three cycles that deal with the subject of leaving and the ambivalence of feeling at once both optimism and fear, disappointments and dreams, anxiety and excitement.

The first of these three cycles, entitled simply LEAVING, produced twelve pieces/monologues delving into the idea of leaving as it pertains to changing careers, moving to another country, losing loved ones, leaving lovers, leaving your younger self, and, most pertinently to this group, leaving college to see what awaits after graduation.

One particular monologue has some of the strongest writing of the three cycles. In it a man, played by Mariusz Kiklica, recently having moved to another country, makes a beautiful comparison of leaving his home and his mother to his mother dropping him off at school, both promising to come back.

A notable comedic upswing by Niamh Chick describes leaving a nightclub, oh yes-the lights coming on at last call being the 'adult equivalent of letting go of a balloon.' Finally, there is the perfect closer performed by Kerr-Alexander Syme who discusses Brexit, unity and division, with a mix of humour and poignancy.

The second of the three cycles: LEAVING - TRANSITION, directed and devised by Pauline Lockhart and the cast, features 12 actors exploring leaving adolescence, beginning with memories of games like duck-duck-goose to bra-fittings and college applications. While the first cycle was episodic, this was a tight story of characters all relating to one another, their relationships and plots weaving in and out of focus. TRANSITION is an apt title for this piece, not only because of subject matter but because the transitions between the eight pieces were innovative and thoughtful.

A notable piece of physical theatre in this cycle shone brightly. It shows a daughter (Shyvonne Ahmmad) carry her father (Ethan Baird) through his apparent struggle with addiction and through his eventual death. This was a strong ensemble piece.

The last cycle entitled LEAVING - SHOULD HAVE KNOWN BETTER, directed and devised by Aleksandar Ivanovski and the cast is a more abstract, metaphorical piece, laden more with emotions than with plot and character. One of the first pieces in this cycle is particularly strong in its perspective and written development: one scene about a couple leaving, splitting, rushing to catch a train. We see the same dialogue played out five different times with 5 different pairs, varying vastly in emphasis and intention.

As the first cycle says, 'Leaving is to change.' Coming to a crossroads in life forces the questions, “Will it be better?” “Will it be worse?” These students have produced fine work and are on the next leg of their journey. They, you, I, we...we all leave. Seasons turn and new challenges arise. That sometimes painful step into the darkness is what punctuates life. Edmond Haracourt describes in his poem, an inspiration for this years PASS OUT, “To leave is to die...One leaves behind a little of oneself at any hour, any place.”