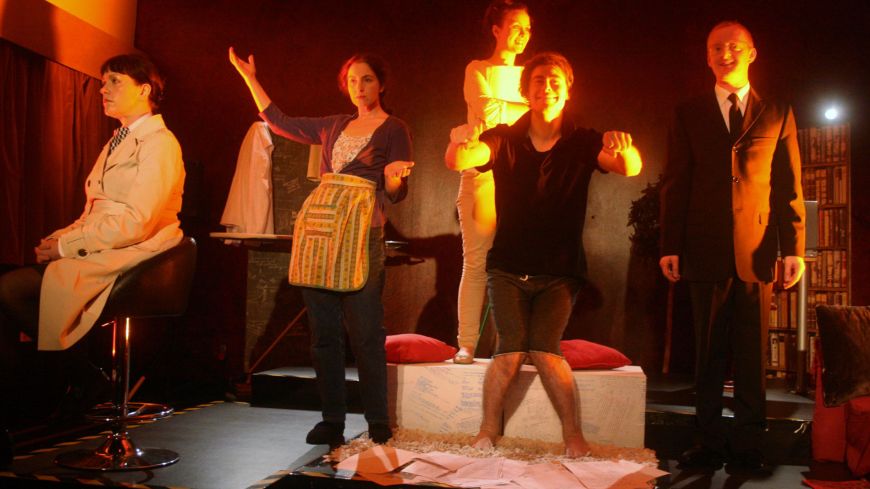 Tenement life.  That peculiar separate-closeness; the strange mixture of hugger-mugger living and the real need for privacy; knowing and not knowing neighbours and their mysterious worlds behind the stair’s closed doors.  Modern shared living that is a far cry from the possible urban myth of unlocked doors and everybody knowing each other.

Instead of the Taggart cry of “There’s been a murder!” this is “There’s been a break-in!”  A burglary has taken place at the flats of One Elliot Park, with the oddly missing flat 3,   but nothing has been stolen. It’s been reported by residents Debs (Danielle Farrow), the harassed mother and housewife, Mark (Tommie Hart) , the hard drinking, music blasting lad and Douglas (Arron Usher),  the uptight ‘suit’ who works from home.  Chloe (Lily Carrie) the young woman who has mysteriously disappeared is a prime suspect.

Amid a cat’s cradle of talk and sound bites we are given some insight to the characters but nothing is what it seems.  Are these apparently innocuous if annoying folk just getting on with their lives or are they a front for some bizarre conspiracy against Chloe, planting electronic bugs in real bugs in her flat?  Is Chloe seriously disturbed or the only sane person in the equation?  The play see saws its way through doubt and questioning.  Who is anyone to trust?

With faint echoes of Priestley’s An Inspector Calls, the Police Inspector (LaVerne Hawthorne), who looked ready to do The Bill walk at any moment, reminded the three neighbours of their responsibility towards their new, and now missing, young neighbour.  Who among them had bothered to befriend her?

The play see saws its way from certainty to confusion as Debs’ thoughts go on a loop, Douglas goes in to overdrive like an android with its wires crossed, Mark is simply manic and Chloe just quietly rocks centre stage.  The madness is only just contained in the unusual and limited space that is a conference room in the Malmaison Hotel, so some clever direction from Andy Corelli. Tommie Hart showed real comic potential with his range of voices as he went from radge to regular polis with ease.

This is an unusual play that places a mirror to our mutual responsibility towards each other. It was played tightly by the five-strong cast, its atmosphere augmented by sounds of a tense menacing cello and apt songs like the Beatles’ You won’t see me, with its poignant line ‘ I wouldn't mind If I knew what I was missing’, and Elvis’ Suspicious Minds. Well worth the trip to Sunny Leith!