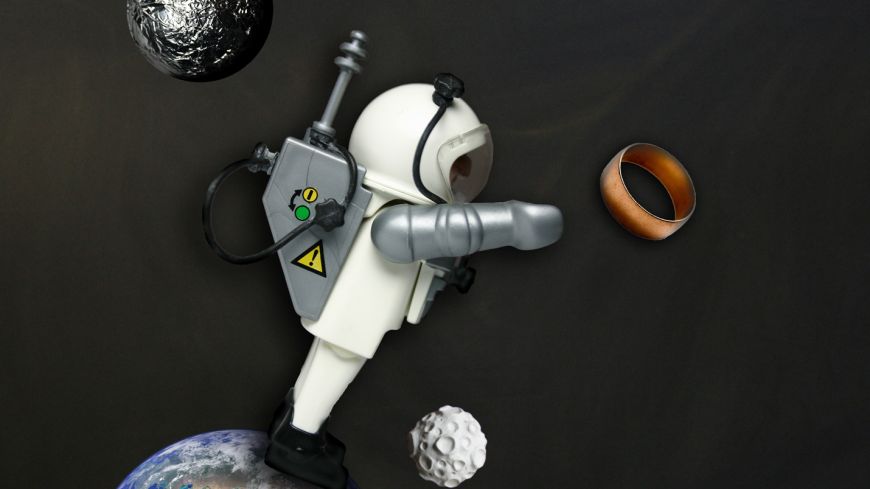 The set of this new production from Andy Manley, Rob Evans and macrobert, Mikey and Addie, looks like the inside a jewellery box with its black pedestals holding sparkly silver treasures.  The two bespectacled characters, dressed soberly yet daringly in combinations of yellow, maroon, grey and teal by the eye of Alison Brown that hint at their future link to each other sit at the edge of the stage.

Addie McAllister (Sally Reid) is doing some blinkingly earnest counting as the audience enters and Mikey Baillie (Michael Dylan) waves nervously from the other side with chattering bubbling sounds that are suitably both earthly and other worldly in the background.

These are hints at the diametrically opposed personalities whose paths are destined to cross through a series of small connections.  Addie is a school monitor who loves obeying rules; Mikey is more of a dreamer who is trying to start a band.  Mikey believes his absent Dad is an astronaut and lives his life with that glamorous lie, carrying moon dust in an envelope.  Addie’s matter of fact view of the world makes her ask probing questions that bring Mikey down to earth, leading him to learn that his Dad was a plumber – an expert in delving depths not soaring heights whose silver car is the closest he’ll get to a spaceship.

The core of this story is reminiscent of the tender and funny 2004 film set in Greenock, Dear Frankie.  In the movie, Frankie’s mother who constantly running from his abusive father, maintains the charade for her son that his father is a sailor on the seven seas and sends him postcards from around the world via a Glasgow post box. The film and in this play have very different outcomes but in each case the child rumbles the truth and in doing so starts to grow up.

The two actors in this thoughtful and visually pleasing piece of theatre are fully and endearingly under the skins of the characters, giving them believable life, each narrating their actions as well as having dialogue.  Their movements around the stage showing their lives moving together have been guided by choreographer Janice Parker.  Once their star crossed paths have come together, this girl and boy see the magic in the moon dust and look to new beginnings together.

Families were again invited to join in the third Fringe for Families on Saturday 12 and Sunday 13 May 2012. In the nooks, crannies and open spaces of the Traverse Café Bar during the Festival weekend from 12 noon, there was painting and craft work, moustachioed Mexican musicians and a squeaky- shoed clown. Great fun.

Mikey and Addie and Scota-land are two new productions commissioned by the London 2012 Festival and supported through the Scottish Government’s Edinburgh Festivals Expo Fund.