McGonagall’s Chronicles, (A Play, a Pie and a Pint), Traverse, Review 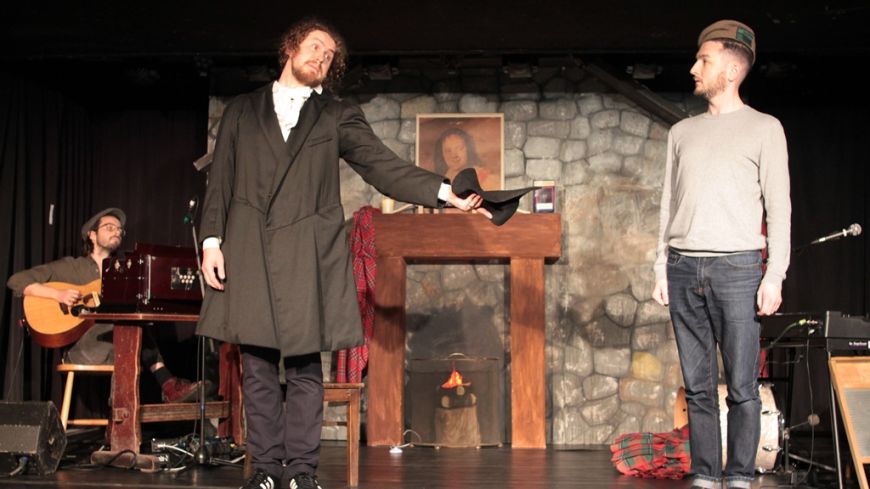 Gary McNair is a very gifted man. He is much loved in theatrical circles, especially in lowland Scotland, for his clever, witty and thought -provoking work that never fails to entertain and delight. As far as I know, he has only been pelted with old vegetables by an audience that’s been asked to do so.

Unlike the subject of his latest work, William Topaz McGonagall, who had more than a few cabbage leaves chucked in his direction when on stage reading his lamentable writing. Yet McGonagall, whose dogged self- belief and determination far outweighed his talent, did not give up in the face of dire poverty and debt. It is the indomitable spirit of this man that the talented Mr McNair has chosen for his latest work, McGonagall’s Chronicles.

McNair is centre stage for this impassioned and sympathetic performance about an ‘unskilled and unschoolled’ man who happened to have big dreams. It’s done against a backdrop that looks like a preparatory Callum Colvin artwork, and is aided and abetted by musician Simon Liddell on a Cutler style harmonium and Brian James O’Sullivan who ably plays a few characters and the washboard!

The entire piece, including some hilarious housekeeping delivered by O’Sullivan, is all done in reverential McGonagall- style rhyme (complete with ubiquitous nae rhythm) and smattered with contemporary references to great comic effect.

McNair’s colourful narration tells of the Edinburgh born McGonagall as he followed the ‘settle and flee’ pattern of his Irish weaver parents, ending up living in Dundee. It was here, late in life, having had a bit of acting experience and some poems published in the The Weekly News, that he decided, counter to the expectations of a working- class man, to try his hand at earning a living by a means other than weaving and took to holding public readings of his poetry.

Maybe it was the addition of the middle name of Topaz that subliminally gave the tragic and gullible McGonagall such deluded ideas about his talent, but in spite of all the rebuffs, rejections and humiliations, he battered on in the face of poverty and debt, visiting Balmoral, London and even New York with undeniable chutzpah and no little faith.

McNair brings his own wealth of talent and sensitivity to kick off this season’s Traverse A Play, a Pie and a Pint with a heartfelt salute to a man so undeterred by bitter experience yet who may have the last laugh as he is still known, quoted and has suppers held in his name.

McNair may have got his shirt in a fankle, but that’s as far as any muddling goes. McGonagall’s Chronicles is an absolute prize of a show!