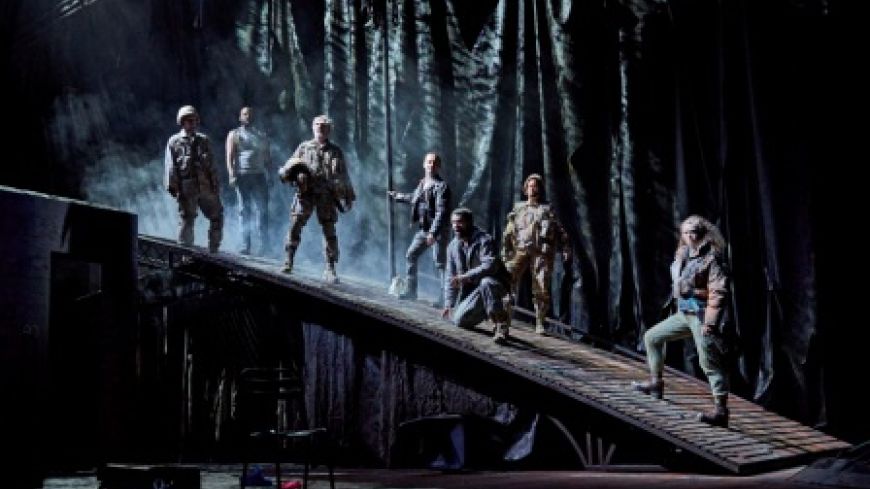 Rufus Norris accentuates the bleak and the brutal in an austere Macbeth, fitting for our time.

Bedraggled black drapes hang in tatters above a dark and barren landscape as the Weird Sisters chant their opening incantation that echoes hollowly in the gloom. Soldiers storm the ramp centre stage and an enemy is decapitated, his massacred head held aloft in triumph. A haunting soundtrack eerily fills the void.

As can be guessed right from the off, this production is all about the visual impact.

There is no doubt that we are in a post-apocalyptic war zone. The country has been torn apart by a brutal civil war. There is nothing good left here and we are in no doubt that nothing good can be made out of it. When the Weird Sisters prophesy that Macbeth will be King, there is no hope that his mission will be anything other than ultimately futile.

There is no respite from this utter bleakness. When the Macbeths prepare to host their King, their minds full of murderous deeds, there is no sumptuous bed-chamber on which the royal head may rest. The Macbeths' abode is all concrete bunkers, the walls crawling with dubious stains, the window blinds murky with mud. The famous feast, that sees Macbeth haunted by Banquo’s ghost, has the guests sitting on mis-matched plastic chairs, at filthy trestle tables adorned only with a few plastic beakers.

It is understandable that in such a hostile environment there is nothing to lose, and this Macbeth is far more desperate than he is ambitious; Lady Macbeth more disturbed than disturbing. The performances from all the cast are full of intention and purpose, but lack a certain impact because of the hopeless feeling of doom that pervades every gesture, every look.

There is, however, something clever about taking a play that is over 500 years old and making it resonate with current themes of the day. The brutal civil war in Syria is played out on our TV screens daily; the hatred and hostility thrown across the bows in a bitterly divided Brexit Britain is relentless; fascism and the fear that attends it appears to be on the rise; the erosion of human rights, journalists brutally murdered – all this is real, disconcerting and threatening.

Perhaps then, depressing as it is, this is the Macbeth that our times deserve.