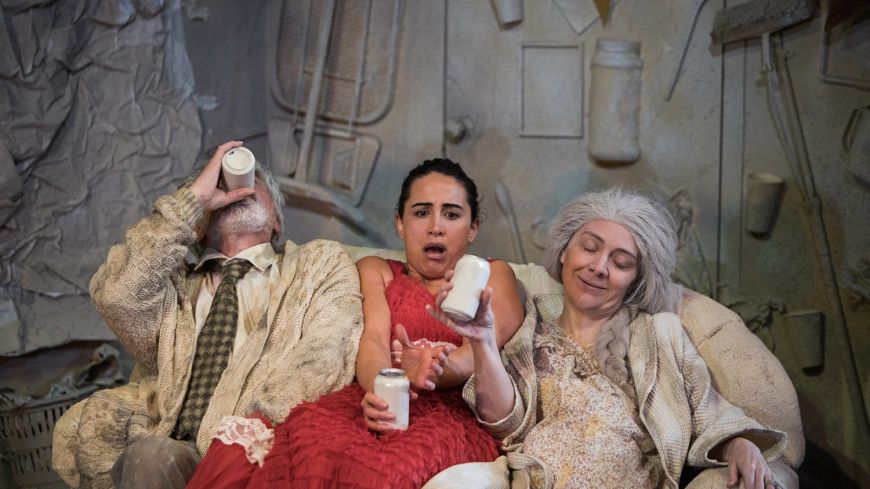 There’s a line in the film Peter’s Friends when Stephen Fry’s character likens the process of being born “...to [being] dropped down a random chimney...and … be able to get on with the set of people he finds there.”

In this dark absurdist comedy from writer Martin McCormick, it is a very strange place indeed that Neil (Nalini Chetty) finds herself when she’s ‘rescued’ from hiding beneath a stationary car when out jogging. Her ‘rescuer’ is Pa (Gerry Mulgrew) who’s out getting the weekly messages for the elderly yet heavily pregnant housebound Ma (Karen Dunbar).

Designed by Charlotte Lane, the stour covered claustrophobically cluttered flat that Ma and Pa inhabit looks like the inside of a bizarre version of a piece of Will McLean art. Here, with only a one bar electric fire for heat, they are hermetically sealed from the world; a place where ‘jogging’ and having a phone with you all the time are strange, unheard of concepts.

While we only see Ma, Pa and their understandably nervous guest Neil, the mysterious Little Mouths are spoken of throughout, yet beyond their diet of egg custard that “helps sweeten their breath and makes them love you”, they remain an enigma. Are they kidnap victims? Will Neil be the next? Are they figments of their imaginations in their closed, light free world?

And it is the brilliantly heightened imagination of Martin McCormick that has created this weird parallel world where, in true absurdist style, he captures the repetition of everyday exchanges of people who have spent much of their lives together, the mix of familiar barbs and acceptance, giving it the unsettling sense of being simultaneously strange and familiar. Pa, a man who is constantly reminded that he had neither had a trade nor a holiday in his life, reminisces about his childhood as a boy with golden hair, while Ma, played by an unusually pukka Dunbar, recalls her educated and refined upbringing and is obsessed with good teeth despite a high sugar intake of custard and Knickerbocker Glories.

Andy Arnold brings a sure hand to the play’s direction in its small space where the perfectly chosen 3- strong cast breathe believable life in to McCormick’s crazy, comic, disturbing yet compelling piece of high relief, surreal theatre that’s like Ivor Cutler’s Life in a Scotch Sitting Room for the 21st century.