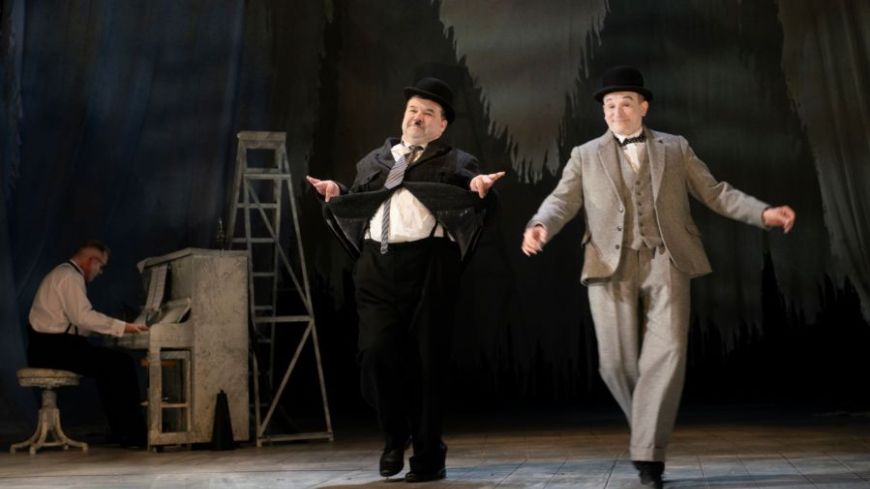 En route to the Royal Lyceum, passing the Waldorf Astoria - The Caledonian, it’s amusing to recall that Laurel and Hardy stayed here when performing in sell out shows at The Edinburgh Empire. During one visit in March 1953, when Stan accidentally spilled coffee on the crisp white table cloth, Oliver turned to the waiter to utter his famous catchphrase “Now look what a fine mess you’ve got me into, Stanley!”

Focussing on the crossover between the Movies, Music Hall and real life behind the scenes, is the theme of Tom McGrath’s play, which premiered at the Traverse in 1976, an immediate smash hit. This is a revival of the 2005 Royal Lyceum production which reunites the same cast and creative team.

In the opening scene we observe their easy going banter, flinging insults at each other like tennis volleys – ‘pompous git!’ ...‘be quiet, fat head!.’ They are nostalgic for the good old days as Ollie wistfully recalls, ‘It was the talkies that did it. Lost all the magic.”

The intimate drama is set in a lost afterlife world, a time to reminisce and remember the Hollywood heydays, from early struggles to global success. The stage set is all grey monochrome with distressed old drapes, a backdrop of a pine forest stretching into the distance; minimalist props - a ladder and two wicker costume baskets.

It was by chance they were both cast in the 1921 movie, ‘The Lucky Dog’ in which the producer Hal Roach recognised their quick-witted camaraderie which led to the creation of their hilarious double act. In flashback scenes, playing a host of characters, we learn how 15 year old Arthur Stanley Jefferson made his stage debut at the Panopticon music hall, Glasgow.

Later, touring the United States with a theatre company, he decided to try his luck in motion pictures, performing as Stan Laurel in his first movie, leading to numerous roles.  Meanwhile in Harlem, Georgia, Oliver Hardy, was a teenage singer in Vaudeville, working his way up in the film industry from production to starring roles.  Finally paired together, they performed in 107 films from the 1920s to the 1940s, all of which were a huge success.

Steven McNicol and Barnaby Power are simply uncanny in their similarity to Olly and Stan, capturing every miniscule mannerism, familiar gestures, voice and facial expression. Physically in height and size, they step into their dancing shoes, with Hardy’s toothbrush moustache and oil-slicked fringe, Laurel’s quirky quiff and their tailored suits, ties and bowler hats.

On piano, Jon Beales is a wizard at not only a speedy sequence of tunes, accompaniment to familiar songs, (‘The Blue Ridge Mountains of Virginia’), but also performs the theatrical noises off.  In dramatised sketches such as from ‘The Wallpaper’s Helper’ (1925), accidental whacks on the head from wayward planks of wood are perfectly co-ordinated with bish, bash, bosh sound effects. These scenes are technically and theatrically mastered to recreate the shaky movements, lighting and whirring frames of the vintage black and white movies.  Each energetic step of these pantomimic antics (buckets of gloopy paste and splashing soda water) is choreographed with split second timing – all just a delightful joy to observe.

The script at times is a little slow going, constructed like a biography with chapters on early childhood, the pressures of Hollywood and demanding ex-wives - background facts and figures which dilute the emotional heart of the drama to get under the skin of their individual personalities.  As the rather formal Straight Man, Ollie (affectionally nicknamed Babe), appears superior but this was apparently a mask for his lack of confidence as an actor; Laurel as the cheeky chappie Stooge, despite being bossed around, took the lead role as creator and manager.

In the 2018 movie which portrayed L&H in their twilight years touring Music Halls, the cracks in their friendship are revealed, accusations of betrayals and blame as Ollie fires a sharp shot at Stan –  ‘You loved Laurel & Hardy, but you did not love me.’

Their unique style, (influenced by Chaplin and Marx Brothers) was not just about visual gags but performed with gentleness, intelligence and humanity. Laurel believed that to dissect comedy was to kill it: “Never ask me what makes people laugh, I don’t know”.  Perhaps their popularity was down to their crazy blend of contrasting personalities and instinctive, spontaneous comedic acting.

Tom McGrath’s play just illustrates so well Laurel & Hardy’s timeless, slapstick comedy which still entertains an audience with guffaws of laughter a century on since their debut movie in 1921. Whatever the truth behind their enduring, endearing partnership, this melancholic portrait of Stan and Babe paints a colourful picture of their harmony in humour, sharing a natural talent to amuse. Simply magic.

Ticket prices from £14. Discounts and concessions.