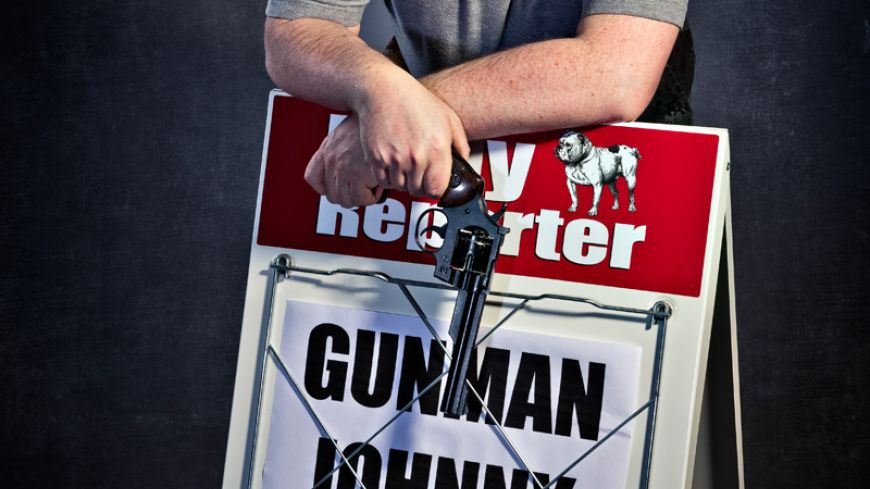 A mad mental malkie of a play!
Andrew MacPherson (Paul Samson) is a dodgy Southside Glasgow businessman with a sharp suited respectable exterior. Johnny Glendenning (David Ireland) is an Ulster loyalist hit man with a weakness for Aswad’s brand of reggae. Bruce Wilson (Steven McNicoll) is a tabloid journalist writing a book on Andrew MacPherson. Wilson has spread a rumour on MacPherson’s behalf that Glendenning is a grass to justify his being killed. In this toxic mix things get a bit wild to say the least with deid bodies lying in every corner.

We are in the farmhouse kitchen of Auld John, a Father Jack lookalike played with laconic comic brilliance by Kern Falconer. His place that he shares with his Mither looks like a rural version of Steptoe’s yard on a very bad day. Inside, some re-useable tea bags are hanging at the window along with a few hares. There is a suspicion between the hapless hit men Dominic (Philip Cairns) and Skootch (Josh Whitelaw) who are there to make use of Auld John’s other form of recycling – feeding murder victims to his pigs – that the hares may be suicides; such is their horror of the country surroundings.
As Kirsty Maccoll sang “…from the sharks in the penthouse to the rats in the basement it’s not that far” and this is evident when action moves to the swish West End flat of Bruce Wilson where a Jim(sic) Vettriano hangs behind his white leather couch. In this fast paced piece of farcical action that is laced with outrageous wit and references throughout Jackson holds a mirror that exposes just how close the gap is. The play’s darkness confirms the fascinated vicarious voyeurism the public has with the ugly side of life involving ruthless violence but from the safety of a theatre seat. It is both weird and surprising throughout, leaving mouths agape at times and especially at the end but it is mostly very funny. The truly inventive programme that accompanies it is sadly not credited.

From Paul Samson’s subtly menacing steely eyed Andrew Macpherson with his up- to- the- minute Peaky Blinders’ style haircut to David Ireland’s cargo short wearing, tattooed Johnny Glendenning, this cast is superb. His portrayal of the mercurial thug who can change from speaking about Wind in the Willows to contemplating castrating his victim with the scary speed of a switchblade is utterly believable. Joanne Thomson enactment of the heavily pregnant Kimberley, a fierce and indomitable wife and daughter of gangsters, is outstanding. Her bump hugging, crab- like manoeuvring herself around Bruce’s apartment as she cleans up the crime scene is worthy of the best physical theatre.

DC Jackson has opened a seam of dark humour in the surreal inventive style of Quentin Tarantino, Martin McDonagh or Jon S Baird’s take on Filth by Irvine Welsh that’s as dark as the glaur in Auld John’s sinister Ayrshire farm. Dinnae miss this!