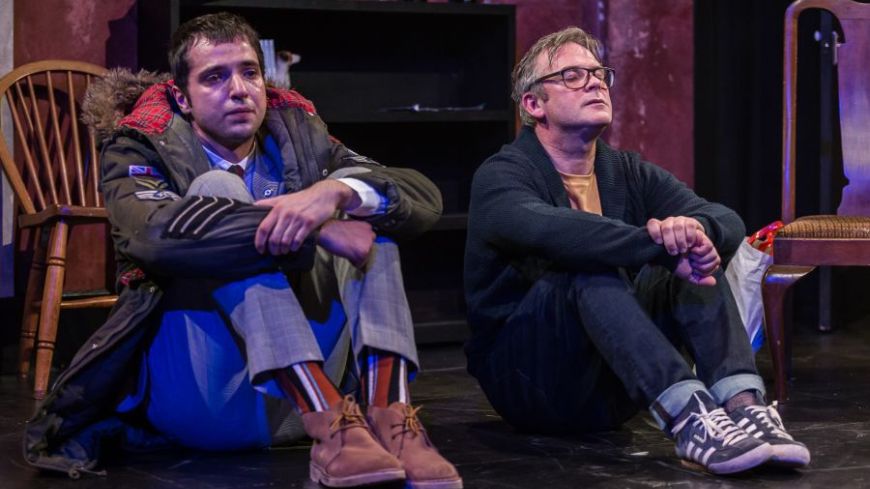 Douglas Maxwell’s new play is a quirky tale that looks at the unusual actions of a Mod-loving asylum-seeker and the academic he contacts to help with his quest. Nebli Basani’s Mod is the physical personification of a lover of Mod life and music, from his style of speaking, to movement, to the love of a lifestyle. Opposite him as an academic in crisis is Paul McCole’s Stevie, a man who gets drawn into a discussion against his will but ends up examining his own life. As a two-hander there is a great deal of text crammed into the piece, with a smattering of music

This is an interesting take on the challenge of asylum seekers and on those who are on the periphery of support, whatever that may be at hand. There are moments and hints of something deeper underneath the surface but these are only briefly acknowledged; McCole’s insular academic Stevie expertly swerves any deeper exploration.

The music is atmospheric and sets the scene well – there is no mistaking the era that Jimmy adores. Eve Nicol’s direction makes the most of the intimate performance space in the Traverse and the dynamic between the protagonists is evenly paced. While both Basani and McCole make the most of their roles, what does not flow as well are the emotional transitions; there are times when it feels there is something not quite fully explored in the journey that Maxwell draws out. McCole’s academic, when talking about his book, is dedicated to of his treatise, but it is clear that there is a disconnect with the urgency of asylum seeking and the reality that Jimmy inhabits.

As a whole the piece has elements of humour and briefly touches on deeper turmoil, but it feels that substance is missing from the heart of the play, and whether this is a comment on the challenge of asylum-seeking itself is difficult to tell. Nonetheless, it is an enjoyable watch, offering a look at the person behind the application rather than the reasons for it. Perhaps that is ultimately the point – the human being, rather than the label.