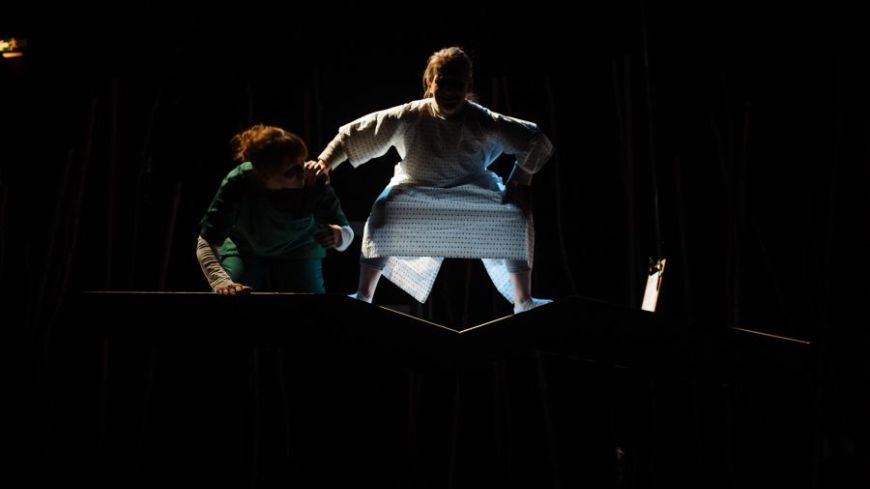 A delightfully quirky take on human evolution in the face of environmental change, this is an entertaining and offbeat piece. The three-strong cast work well together: there are many laugh out loud moments, with Beth Marshall’s comic timing in particular giving strength to Ellie Stewart’s witty and amusing text. Caitlin Skinner’s clear direction means the storyline, off the wall though it is, makes sense in this not-quite-here world.

This play looks at the impact of a woman who has an affair with a swan and her resultant half-bird child. It could have been interesting to find out more about the background to this unusual romance. However, the idea of being able to fly – because of being born with wings – is a fun one and Ryan Havelin manages to bring a great deal of amusement to Magnus as he explores the challenges of half-bird physicality. Kim Gerard as his mother Hope plays it mainly straight, so it is good to see a sense of fun that comes out when she becomes the birds that follow her half-bird son.

Marshall’s Joy has challenges of her own and with hints and digs about the impact of the current political situation on working class people and fragility of their living situations, she paints a funny but tough picture of life on the edge of financial and emotional survival.

There is a wonderful section where the birds dance free, the freedom that comes from being other than human. What feels somehow out of kilter is the story of Magnus once he migrates north and the end when it comes seems to fade away, rather than with a punch. Whether that is a comment on the future of the planet or not is perhaps a debate to be had.