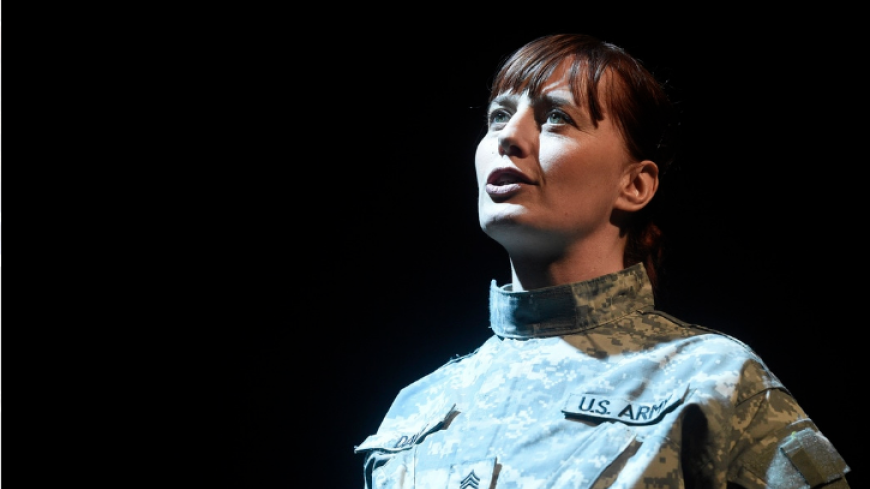 “You didn’t ask, but I had to tell you anyway.” playwright and sole actor Mary Jane Wells remarks from the stage as Sergeant Danna Davis, a tinge of exhaustion in her voice while portraying the US Army soldier on whom Heroine is based. It is an important nuance; how exhausting it must be for the responsibility of sexual violence and trauma education to fall onto the shoulders of rape survivors themselves.

Don’t Ask Don’t Tell was the official United States policy banning military service by openly lesbian, gay and bisexual members, instituted by the Clinton Administration on February 28, 1994 and then repealed in 2011 under the Obama Administration. When her fellow soldiers picked Danna up outside a German gay bar with the intention of premeditated gang rape, it was this not yet repealed policy they invoked in order to ensure her silence. This piece details Danna’s survival and delves into the circumstances Davis had to face: serving alongside her assailants in battle and in silence.

The crafting of this piece is informed with emotional intelligence and ultimate respect for survivors. In fact, Wells has said, “It was always my plan to throw the play into the world like a compassion grenade.” The signs posted up around the Traverse initially had my toes scuffling on the floor in front of me, my fingers fidgeting with my nail beds as I took my seat. These signs responsibly assured audiences that if the subject matter grew too intense they were free to leave and return at any time, that a counselor is on hand in the bar should anyone have need. While the assault was laid excruciatingly bare (as it needs to be), I was glad to see that Mary Jane Wells as writer and performer and Susan Worsfold as director put the incisive focus on Danna’s story, humour, person and survival. The black humour Wells imbues into and throughout the harrowing trauma in Danna’s life only strengthens the piece, as it surely must strengthen Danna herself.

Sound design (Matt Padden) and lighting design (George Tarbuck) takes this from an impactful, galvanising and tactfully-written piece of monologue theatre to a completely enveloping experience wrought with metaphor, lyricism and imagery. In one instance at the start of the piece Wells’ writing alludes to a flood, suggesting that there are people that do survive a flood. They even go on to swim happily again.

No register of military sexual offenders existed until 2014 and yet survivors and military sexual trauma (MST) are sadly only growing in numbers, with 19 of the 22 American veteran suicides every day being MST survivors themselves, according to the American Psychological Association. For those who stayed behind to listen to the panel discussion and hear another true account, this time from a British woman who has lost her sister to the aftermath of MST, it is clear this horror is not only within the United States military but here at home as well.

Mary Jane Wells has written a visceral piece that will continue to tell the truth and empower others to do the same. It is unacceptable that this work needs to be made, but it is comforting to see the work made so well. Thank you to Danna Davis for sharing her story and to Mary Jane Wells for capturing it, conveying it and honouring it so well - for Danna and all survivors. As Anne MacDonald, former advisor to Survivor Scotland, said in 2018, “There was not one inauthentic note in Heroine”.

Heroine will make its US debut at none other than the Kennedy Center in Washington DC, 12-14 Feb 2020.