Eulogy (A Play a Pie and a Pint), Traverse Theatre, Review 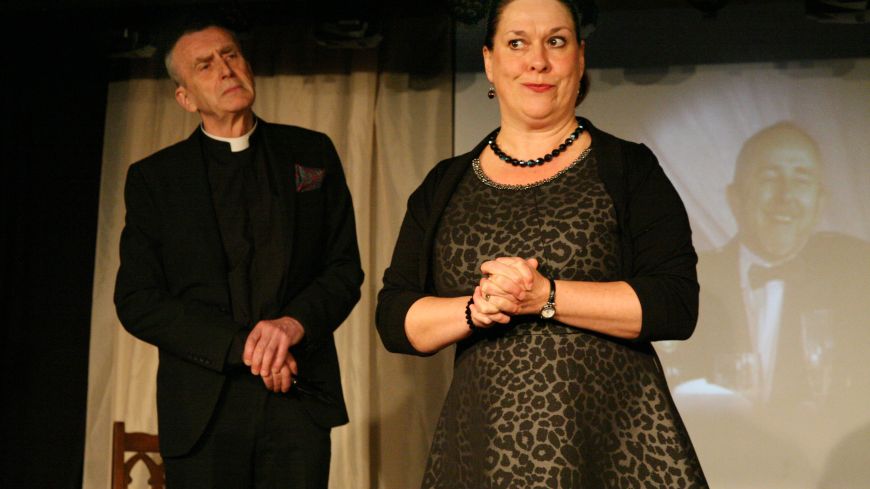 All are gathered here today to celebrate the life of Sandy Munro, a life that is certainly illustrious, albeit, rarely what the eulogisers would deem celebratory. He was a “miserabilist,” his estranged wife, Anne, comments. The Traverse theatre as the setting for this service, the audience is onboard another series of A Play, a Pie, and a Pint and, this time, it’s a sequel to a 2011 piece by the same author, Rob Drummond, entitled Top Table .

Sandy is a bit of a letdown. His wife laments his choice of career: cat and dog food quality tester. His brother Andy, now a minister, gives the eulogy for this performance, but more than thinly veiled resentment seeps through when retelling the countless times he’s had to bail his brother out of his various mishaps, causing Andy to lose everything including his vintage car and his girl, cutely named Mandy. His wife Anna has shown up, black sunglasses donned and pursed lips on display. She’s now living in Cyprus with a sailor and has taken his kids with her. She’s mainly here to tell her side of the story...or is she? The coffin sits in the center of the room, and the programme gives a thankful nod to Co-op funeralcare! Maybe they’ve donated it, or maybe it’s just another quirky little detail that is another nuance to this piece. There’s more than a few surprises that unfurl from this black box altar-of-sorts, and the audience giggles along with the playfulness and absurdity of the hour.

This piece is an audience-interactive, silly and light-hearted delight. Never dropping too far down into the morose, chat about death is surprising and laughable, especially with anecdotes about Sandy and the intermittent parody songs thrown in and amongst the sorrowful, but bitter, recounts from his devoted older brother, Andy. We, the mourners of Sandy Munro, are encouraged to join in, following our programmes along to the altered tune of Candle in the Wind and the Grease classic, Sandy . The whole thing is quite a farce, but with every weaving story, you feel the person of Sandy come into a realised, rather unlovable, person, whose final monologue actually somehow brings a bit of sympathy to his character, stirring a, “Ahhh, he’s done it again!” feeling in the hearts and minds of the actors on stage and the audience behind the pulpit.

The plays more solemn moments strive to have feeling and rise above the madness, which is a welcome addition; however, the delight of the play lies in its sheer camp.

Beginning in 2004, the A Play, A Pie, and a Pint series is a lunchtime theatre programme that develops new works, showcases the works of many of Scotland’s greatest writers, and has been called ‘One of the most magical theatre initiatives of the last decade’ by the Scotsman. The next production in this year’s series is The Persians , from May 1-5, 2018.