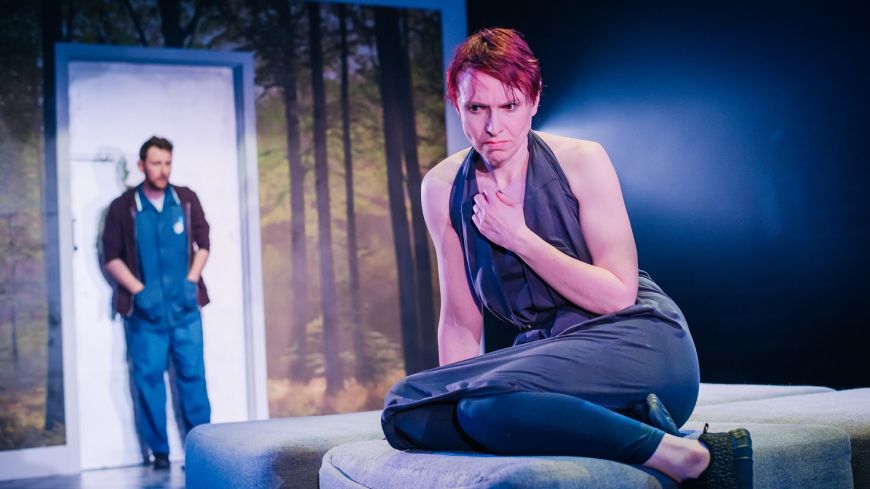 It’s a creepy enough experience to have your route tracked and asked opinions of some random café you happen to have passed or have lots of links appearing on your screen after some purchase or other. What happens in Stef Smith’s not-so-far futuristic play is altogether more chilling.

Polly (Rosalind Sydney) and Owen (Michael Dylan) are a thirty something couple. Polly inhabits the high flying world of corporate law where she has just been promoted. Owen is a nurse dealing with blood, guts and death on a daily basis. They are opposites, but very much in love and looking at the right time to start a family, though in reality not too closely. Owen’s bringing home a freebie from work in the form of a black box that can ‘sync … your heartbeat’ and create ‘visions’ is the play’s catalytic moment that will throw into question if their love will override their diametrically opposed world views. In a reversal of traditional gender roles, Polly is the technophile in the relationship and embraces the seductive new toy oblivious to its sinister power.

Traverse 1 is transformed to accommodate a giant black container that divides the usual single bank of seating, placing the stage in the middle in old Traverse style. It slides away to expose the couple’s living space where the décor of a gladed forest is in sharp contrast with trompe l’oeil hexagonal black and white flooring that stands as a metaphor for their opposing perspectives.

Stef Smith’s writing makes frequent use of repetition and rhythmic speech, evoking the heartbeats that feature so strongly throughout the play. The lines are brilliantly delivered by the cast, with the voice of Victoria Liddelle effectively being the electronic voice of the box.

Across Neil Warmington’s brilliant set, Dylan and Sydney leap and run with impressive energy and physicality that’s been choreographed by White & Givan. Add to this music and sound from Kim Moore that includes along with her own work Kylie Minogue’s utterly apt Can’t Get you out of my head and Orla O’Loughlin’s clear sighted direction and you have a positive whole that counterbalances the apocalyptic message.

Whether you choose the ‘reality of a kiss’ or the possibility of virtual bliss; whether you see a citizen chip as a nuisance or a mere ‘snowflake', Girl in the Machine holds up a vision of the future that poses vital questions of our time about dependence and addiction; about whether the virtual is valued over the real. This is a play that gets in to your head.