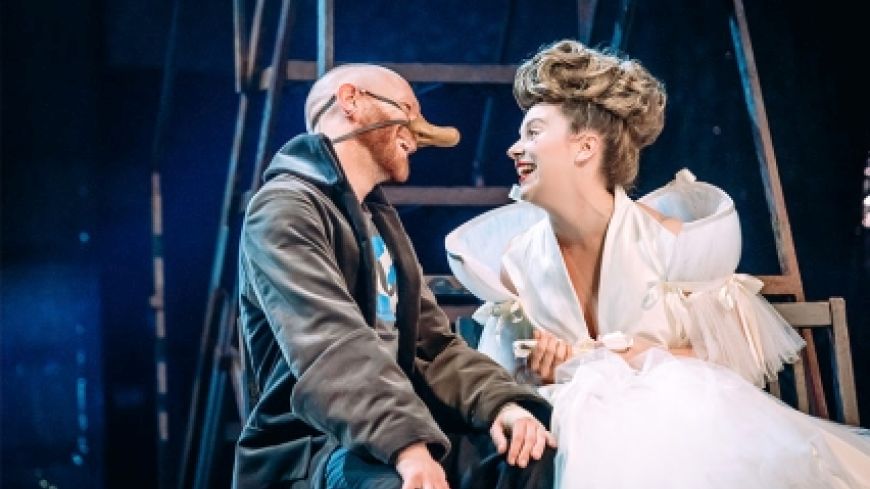 He enters, all swagger and buckle swash, the stereotypical Glasgow hardman heckling untalented actor Montfleury – “Eejit, Ah gave ye wan month to get aff the boards! ... Get doon, ya clown ye!’. And warning against continuing “You, ya tube, ah‘II skelp yer lugs if ye do, ya fat jujube!”.

Before long, his nose leads him into a battle of words as he crosses swords with the insolent Vicomte De Valvert, proving the sharpness of both tongue and blade - “At the final refrain – I draw blood”.

Cyrano is however a man of higher ideals; of honour, valour and love. For he is deeply besotted with Roxane, his beautiful and intellectual cousin who happens to have a romantic nature and a soft spot for poetry.

If it wasn’t for his nose getting in the way Cyrano would be a perfect suitor. Roxane though has eyes for her admirer, the handsome Christian, who unfortunately can’t string two words together. Finding himself friend-zoned, Cyrano’s love for her, his virtuous nature and crippling self-esteem issues over his appearance see him combining with Christian as “a hero by design” to woo her. Now, Cyrano can express all his thoughts and feelings secretly; but like all love triangles things will get messy.

This epic romantic comedy is one of the best loved in theatrical history. Debuting in 1897, Edmond Rostand’s play was an unprecedented triumph, and Edwin Morgan’s Scots translation, first staged in 1992, went on to be legendary.

The play remains set in seventeenth-century France, but Morgan (first Glasgow Poet Laureate and Scots Makar) added a colloquial and lyrical dipping of modern Glasgow dialect and “historical” Lowlands Scots. His aim was to have a language that was speakable and accessible, while being “strong on imagination, on shock, on analogies and vistas". Spicing things further he sprinkled some gallus anachronisms, to capture the inventive and flamboyant spirit of the original.

The result is racy and linguistically sparkling, though the “shock” of the nature of the metre of the verse with its audacious rhyming takes some time to adjust to. The mix of amplification, the design and perhaps the fact that we are not in Glasgow require a conscious effort to keep up with the text. Even if not every word is caught the language is wonderful, adding huge vitality to the play.

To a background of live music, chef Ragueneau allows beatnik poets to feast on the food of love and forms an auld alliance from coq au vin to salt & sauce. Further lines plumb the depths of the language for a “chanty wrassler”.

It is all on an epic scale with enough action to keep a cast three times the size busy, but the troop flow over the flexible, stripped-back set, climbing over and through it to provide the backdrop for the traditional five scenes. The transitions are sometimes marked by flickering neon signs before a screen of plastic offering a sort of bokeh effect to action behind. The costume design with fantastic frocks, punky t-shirts and baroque, curlicued towering hair is a delight. It just about wins out when fencing with the parochial and engaging with tartan and teacakes.

The cast are strong throughout and Ferguson rises to playing the hero with a dazzling, passionate performance, completely connecting with the text. Only in the closing is it possible that there might be something more to be drawn from the tragedy.

With a mix of styles and influences it’s a rambunctious poetic performance, drunk with love, which captures the work’s imaginative and flamboyant spirit and the longing in the soul for high ideas, great sacrifice, and pure love.